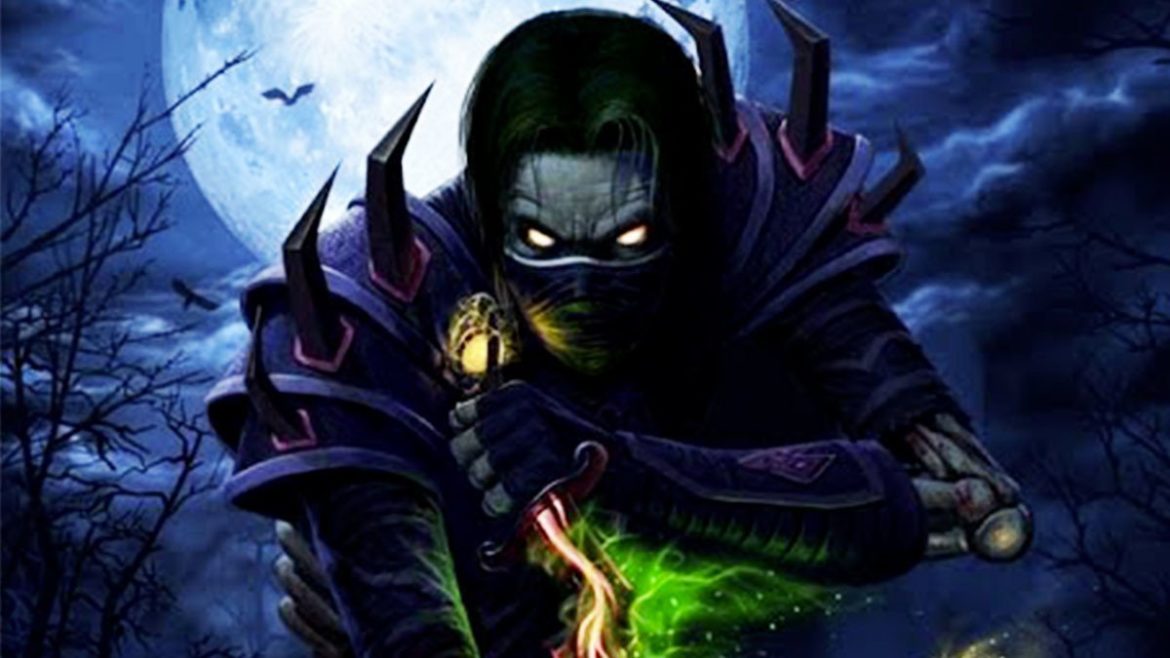 Rogues are master assassins. And you don’t always spot their amazing outfits because they’re hiding in invisibility. But the truth is that the Rogue class has some of the best transmog sets in the entire World of Warcraft. They’re often dark, sinister, and they whisper of daggers in the dark – everything a Rogue can ask for!

In the eyes of Blizzard’s visual artists, Rogues are often depicted as mischievous killers that lurk in the shadows. Many of their armor sets feature daggers, bones, or fangs, and a sensation that they’re ready to spill some blood. So today we’re looking at the top 15 transmog sets for the Rogue class and how to collect them!

If you’re new to World of Warcraft and aren’t quite sure how the transmog system works, this is all you need to know. Basically, the transmogrification NPCs in WoW let you change the appearance of your gear. To swap the looks of your sword, for example, you must have used at least one more sword during your playtime. When you click on a transmog NPC, you can choose how each of your gear slots can look like. And you only need to pay gold to make the change.

Keep in mind that you can collect entire sets and transmog them whenever you want. So if you’re Rogue, these are the best transmog sets to look after in WoW!

15. Vestments of the Dark Phoenix

Vestments of the Dark Phoneix is the Rogue transmog set that no one expected. It was released back in the 4.2.0 patch and it came directly from the Firelands raid in the Cataclysm expansion. This was the first time that we actually saw a gear set for Rogue that featured some animalistic elements and not just daggers and blood.

The Heroic version of these vestments is completely in purple and covers most of the character’s model. The most interesting parts are the shoulders and the helm which display storm crows. Later on, in Legion, Rogues received their crow class mount, and this set made much more sense to players!

The Nine-Tail Battlegear is another fantastic transmog set for Rogues, especially if you don’t like the traditional black-and-red outfits. True, it’s not shiny nor overpowering, but the design is unique and it definitely stands out. The white coloring is something we don’t often see on the Rogue class, and pictures can’t really show the actual tail sticking out of the back of the head. So we recommend you start collecting the Nine-Tail set as soon as possible!

For that, you’ll need to solo the Throne of Thunder raid in Mists of Pandaria on Heroic difficulty. This is a pretty long raid and it’s definitely not a quick run. Plus, you’ll need to get access to the actual island where the instance is actually located. Here is a video with all those information!

Many classes received incredible transmog sets with the PvP season of the Primal Gladiator, but Rogue is among the best. Everything about this outfit perfectly matches the spirit of being a Rogue in WoW. Spiky shoulders, sleek leggings, and a bloodlust helm.

Primal Gladiator’s Leather Armor is one of the easiest transmog sets to collect. You simply need to teleport (from Stormwind/Orgrimmar) to the Ashran zone in Draenor and purchase the outfit for 12 Marks of Honor from the Primal Gladiator vendor. And that’s it!

To this day, Icecrown Citadel is still one of the most breathtaking raids in World of Warcraft. It was the home to the Arthas, the Lich King, and his scourge. And while most classes of that era got their frozen armors, Rogues got something else – Shadowblade’s Sanctified Battlegear.

This set is an example of how a unique idea can fit into a general theme. Shadowblade’s Battlegear indeed looks deadly and unnatural, but those aren’t the only elements worth noting. Instead of blades, the shoulders feature fangs; and instead of two slits, the helm has only one. Parts of this set were worn by crawling creatures inside the Icecrown Citadel, so it’s quite a fitting outfit for a fan of Wrath of the Lich King.

With the release of Battle for Azeroth, Blizzard decided to cut the tier sets for each class. And instead of designing a unique outfit for every class, they gave every armor category a set. But that wasn’t too bad, since Rogue, like the rest of the leather wearers, got one of the best transmog sets in the game – Boneblade Battlegear.

The Boneblade Battlegear set comes from the Battle of Dazar’alor raid on Mythic difficulty. Currently, in Shadowlands, you can’t really solo the raid on this difficulty, so you might need to team up with a couple of friends to farm it. But it’s totally worth it since it’s the only armor set in WoW that gives Rogues such a bright, blue, and bony look!

The Cataclysmic Gladiator’s Leather Armor was one of the most refreshing transmog sets that the Rogue class got up until later expansions. It was the official outfit of Rogues during the first PvP season of Cataclysm and it was everything we wanted – powerful and terrifying.

The goal of this set is to give your character a look of monstrosity. Behind the hood, there is a sinister skull blazing with purple energies. You can see bones all over the model mimicking the human skeleton. And for the price of 12 Marks of Honor, this set is totally worth it!

9. Regalia of the Dashing Scoundrel

Since the dawn of time, Rogue has been the class of professional assassins. But with the rework of the Outlaw specialization, we finally got to play a pirate in World of Warcraft. And the last raid of the Legion expansion, and most specifically Antorus, the Burning Throne raid, gave us the official Outlaw Rogue outfit!

The Regalia of the Dashing Scoundrel is an exceptionally well-designed leather set. All item pieces look carefully crafted, proportional, and amazingly suited to each other. There are actual pockets along the leggings and a feathered hat on top of the character’s head. What more do you need?

Older players may remember the Wind Dancer’s Regalia as one of the most beautiful Rogue transmog sets during the time of Cataclysm. Never in the history of the game has Blizzard attempted to create a similar set for Rogues again and we aren’t sure why.

Compared to most other outfits, Wind Dancer’s Regalia clearly lacks all the key elements – no blades, fangs, blood, bones… It’s a simple green leather set that blazes blue light out of the shoulders and headpiece. Its actual appearance in-game is magnificent, so we recommend you start farming it right away.

Back when the patch notes for the Ulduar raid were released, many players didn’t like the Valorous Terrorblade Battlegear. And we can understand it because the general design of this set is a bit odd. However, once players saw the set in-game, their impressions were quite different indeed!

The Valorous Terrorblade Battlegear is a terrifying sight. The headpiece is an actual skull that hides the character’s face beneath its hood. There is a shawl that puts a shadow on the face, masking the Rogue’s personality. And thee shoulders are the most amazing element with their flickering lights constantly whipping left and right.

Legion was the expansion that gave us the most glorious transmog sets for every class, including Rogue. That was certainly the case with the Emerald Nightmare and The Nighthold raids which offered the Doomblade Battlegear.

The Mythic version of this outfit is dark and shadowy, with golden armor covering the key parts of the body. Both the shoulders and the head emanate flowing shadows. And the malevolent red slits are the ideal fit for the general theme of the set!

Ever since the start of World of Warcraft, Rogues were the only playable characters that made use of poisons. And up to this date, Rogue players apply different poisons on their daggers to decapacitate or assassinate their enemies.

The Poisoner’s Battlegear is the official outfit of such a Rogue in WoW. This set is quite unique, with big bulging shoulders and a gas-mask type of headpiece. It comes from the Blackrock Foundry raid on Mythic difficulty, and you can easily farm it solo.

Even though Shadowlands followed the same set philosophy of Battle for Azeroth and gave us sets based on armor category and not on a class, the Sin Slayer’s Leather proved to be one of the best transmog sets for Rogue. Castle Nathria was an incredibly thematic raid and the leather gear perfectly fits the magic of the instance!

The entire set looks like a mix of a gentleman’s outfit and an assassin’s clothing. There are sharp blades all over the shoulder pieces and the eyes are creepy-looking and filled with Revendreth’s anima. It’s such a magnificent transmog set and most Rogues should have it!

The Tomb of Sargeras is definitely the raid that increased the standard of transmog sets for all classes, including Rogue. The Fanged Slayer’s Armor is easily one of the best outfits that Rogues can put on in WoW. For starters, it’s the only set that features fel instead of blood and gore elements. The fangs and spikes are demonic instead of human, and the outfit’s entirety is embroidered with gold. Simply glorious!

Tomb of Sargers is a difficult raid to solo in Shadowlands, but it’s doable. The last boss, Kil’Jaeden, may give you trouble, so be prepared to call some friends. But it’s totally worth it!

When we think of Rogues, we usually imagine them clad in the Merciless Gladiator’s Leather Armor. During the Burning Crusade expansion, Rogue was perhaps the most notorious in the game. They were exceptionally powerful in PvP, especially the ones that had the Warglaives of Azzinoth!

The Merciless Gladiator armor perfectly captures the idea of being a rogue in WoW. It’s a dark outfit adorned with fangs and skulls. The headpiece is the most remarkable part, with two purple eyes staring out of a demonic skull.

These days the set can be purchased from the PvP vendors in Netherstorm so every Rogue can have it!

But during the classic era, Rogues were perhaps the best class to play in PvP too. Their crowd control and damage were simply unmatched. On top of that, they had permanent invisibility too as well! And many players to this day are terrified when they see a Rogue using the Bloodfang Armor as a tranmsog set. We all have nightmares of being slain by such Rogues during our leveling in Stranglethorn Valley.

The Bloodfang Armor is really the classic set for Rogues. Its black-and-red coloring is the foundation that many other future sets are based on. The shoulders are sharp and spiky. And the deathly hood with two red eyes watching from underneath became the signature of this class’s appearance.

Players can collect this armor set by raiding Blackwing Lair.

And those are the top 15 transmog sets for your Rogue character in WoW!