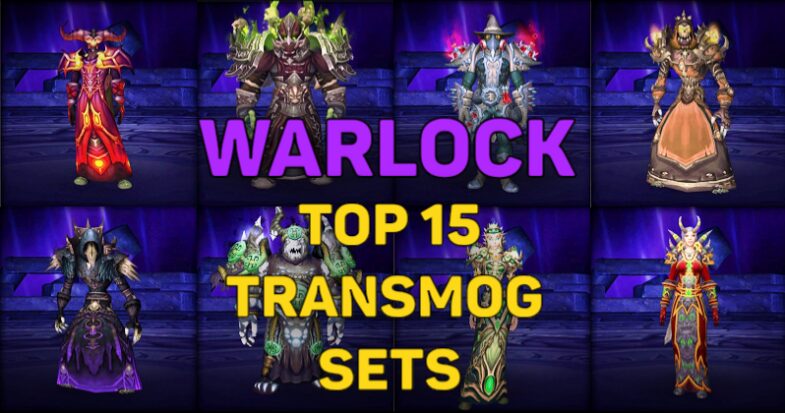 Warlocks have never struggled to look scary, right? Blizzard has stayed consistent in delivering unique and impressive armor sets so Warlocks can properly display their power in-game. Ever since the start of World of Warcraft, gear sets like the Nemesis Raiment from Blackwing Lair have been so iconic that they have set the golden standard for future sets. And today, we’re looking at the top 15 Warlock transmog sets in WoW!

The transmog system allows us to deeply customize and personalize our characters. It’s one of the best features that Blizzard has introduced to increase the player’s agency. Being able to make your current gear look like an armor set from the past is honestly amazing. And this is especially true if you’re playing a Warlock because this class has some of the best transmog sets in the entire World of Warcraft.

That said, let’s jump into our list of best armor sets for Warlocks and how you can collect them!

We start it off with the Primal Gladiator’s Felweave Armor set. The reason why this is one of the best transmog options for Warlocks is that it doesn’t lack anything. Blood, bones, and fel – what more can a Warlock ask for?

The Primal Gladiator set was released on the patch before the Hellfire Citadel raid in the Warlords of Draenor expansion. Despite that, the themes are clearly demonic, with dark color hues of red and green. The alliance version of the set has a bit more blue to it, but it’s nearly the same.

14. Vestments of the Black Harvest

When we think of Warlock, the Vestments of the Black Harvest set is one of the first to pop in our heads. It may not be the most elite transmog out there, but it perfectly matches the theme of the class. Long curled horns, violet chaotic tattoos, and dominantly dark robes.

Warlock players originally collected this set by completing long quest chains with their Class Order Hall in Legion. The set gave nice bonuses during the initial launch of the expansion and everyone could have it. Despite that, it’s still one of the best sets you can transmog on a Warlock!

The first raid of Shadowlands, Castle Nathria, gave us the Depraved Beguiler’s Visage set. This is the official cloth armor set for the Mage, Priest, and Warlock classes. And even though it isn’t specific to Warlocks only, it certainly suits them the most!

All versions of the Depraved Beguiler’s Visage armor have similar designs but different coloring. Here we’ve chosen the mythic version, simply because it’s the most akin to Warlocks. The “plague doctor” headpiece is what makes this set truly distinctive and dominant, especially for an Affliction Warlock.

During Legion, Legacy of Azj’Aqir was another set that made a significant appearance. And one look at it is enough to make you realize why it’s one of the darkest Warlock transmog sets in the game.

It has void orbs all over the shoulders, chests, arms, and waist. The robe is a grandiose match of black and gold. And the headpiece is a demonic helmet adorned with horns. All in all, it perfectly matches the demons we fought in Legion.

Legacy of Azj’Aqir isn’t the easiest set to collect, but a couple of runs through The Nighthold and Emerald Nightmare on mythic difficulty should get you close!

11. Regalia of the Thousandfold Hells

Regalia of the Thousandfold Hells is a unique transmog that comes from the Throne of Thunder raid in the Mists of Pandaria expansion. It doesn’t feature any major Warlock elements, but it still manages to be truly terrifying.

Instead of fel and void, the entire set is covered with crimson fire. On both shoulders, evil masks guard the wearer while breathing red mists. And the head looks like a gaping inferno chasm!

This is one of the most refreshing Warlock transmog sets, especially if you’re tired of the black and green coloring.

During Wrath of the Lich King, Warlock was among the strongest classes. And on the last patch, the Wrathful Gladiator’s Felweave Armor set was added to match their dominance. Players still use this transmog regularly, simply because of how distinctive and significant it is.

The orange-brown-yellow combination isn’t something we see often on transmog sets for Warlock. There are also no horns and no demonic features. In fact, the whole set resembles the undead scourge we fought back in WOTLK. Except for the fact that the Wrathful Gladiator’s Felweave Armor looks like the most elite one of them all.

And now, back to the basics! Here we have the transmog that displays the most fel of all other Warlock sets – Ruthless Gladiator’s Felweave Armor. And if you aren’t sure how to “xmog” a destruction Warlock, then here’s where you should start!

The entire set is green, with deep hues, bright runes, and emerald gems. There are also chains, spikes, and bones all over it, which definitely hit the right spots. On top of the shoulders, as well as on top of the head, gleaming orbs of fell stand ever-burning. So just imagine how hard your Chaos Bolts will hurt while wearing this transmog!

8. Vestments of the Faceless Shroud

If the traditional Warlock sets are a bit too monotonous for you, then we advise you to start collecting Vestments of the Faceless Shroud. This amazing armor comes from the Dragon Soul raid in Cataclysm. Here we chose the normal version, but the heroic and raid finder variants are also appealing.

At first glance, this looks more like a Priest set than a Warlock set. It definitely reminds of the Old Gods and N’zoth’s corruption that took over Deathwing during the expansion. You can see tentacles coming out of under the hood and spreading all over the robe. There are also bones and spikes of irregular sizes. In other words, it’s an excellent set for a class that keeps it close to the darkness.

From Mists of Pandaria, we have another iconic transmog set for Warlocks – Sha Skin Regalia. Sha was the new evil we encountered in this expansion, a remnant of the Old God Y’Shaarj. The Heart of Fear raid was full of Old Gods’ minions, so this set was how Warlocks counter them.

The helm, the shoulders, and the gloves all represent the black-and-white Sha. They look monstrous and unnatural, which definitely fits the Warlock theme. The normal and raid finder versions of the set have different coloring, but they both look stunning as well.

If there is one set that all Warlocks want, despite experience, specialization, or skill, then that set is Malefic Raiment. Malefic Raiment was the first set that truly distinguished the Warlock class and it came during the Burning Crusade expansion.

Horns, fire, wings – everything about this armor speaks of destruction and chaos. It was the official armor set that players could collect by raiding Black Temple, the home of Illidan Stormrage. That was the first time we saw demons from up close in WoW, and the Warlock class received one of the best sets to transmog.

Tomb of Sargeras was a special raid in Legion because it reintroduced the class item sets from Black Temple. As was the case with the other classes, the Malefic Raiment set got reworked into Diabolic Raiment, However, since the history of Malefic Raiment was so big, Warlocks won the transmog war there.

When you look at the armor closely, you’ll realize that it’s not simply a high-quality rework. This mythic version is a bit bigger, shinier, and more daunting. It also comes with a cape and belt, which wasn’t the case with the Malefic Raiment set. And the most important detail is here as well – demon wings spawn and flap from the shoulder pieces when you jump!

Also, there are 3 more recolors of the same design from the other 3 raid difficulties.

For many players, the Nemesis Raiment is one of the best Warlock transmog sets. This is especially true for those who played during the vanilla WoW era, or who collected the armor the second time around during classic.

Whatever is the case, no one can deny it that Nemesis Raiment is one of the scariest sets in the entire game. Everything about it, from the green and violet robes to the green skulls and horns speaks of the original Warcraft. And if you haven’t already, we definitely suggest you to start collecting it!

And here we have another classic! The Felheart Raiment armor is the first tier set for Warlocks in World of Warcraft. Players used to farm this set in the Molten Core raid back when raiding was a 40-man job.

But the reason why Felheart Raiment made such an impact on everybody is that it showed the true intent of Blizzard towards Warlocks, at least aesthetically. The headpiece is a set of horns, the shoulders are full of spikes, and the robes are adorned with fel. Clearly you can see how it influenced some of the other Warlock transmog sets on this list.

Even though the Warlords of Draenor brought us so much interesting transmog gear, no one really expected the Shadow Council’s Garb. This is one of the most beloved sets in World of Warcraft by all players, regardless of the class they play.

If there is one in-game character that has been the face of the Warlock class historically, then that is Gul’Dan. The old orc Warlock was one of the most influential figures in WoW’s lore. So naturally, players wanted to look like him! Well, the Shadow Council’s Garb was Gul’Dan’s official armor set. And to be even more surprised, the set was partially recreated in the World of Warcraft movie!

And the number one transmog set for Warlocks is Conqueror’s Deathbringer Garb. Ever since Wrath of the Lich King, and the Ulduar raid specifically, this has been the most sought-after armor for this class. It’s the pinnacle of Warlock aesthetics, despite the fact that it doesn’t have any demonic elements.

Conqueror’s Deathbringer Garb is an armor set that leans more towards shadow and void. It has bones on the shoulders and skulls all over the robe. A large fang sticks from under the hood as well. And many players are not aware that the headpiece hides the player’s eyes underneath, gleaming with yellow.

Even though most players love the transmog, no one really knows why it’s so special. Perhaps it is that fact that Blizzard has never really attempted to design something similar for any class, not just Warlocks. Or maybe it’s because the set perfectly matches the Forsaken race, some of the most renowned Warlocks in WoW.

Whatever is the case, we all remember this cinematic and the moment we first saw Conqueror’s Deathbringer Garb!

We hope we helped you pick the perfect transmog gear for your Warlock! Some of these sets are easier to collect than others, but they’re all available in the game if you’re dedicated enough. By listing the sets, we intended to give you more background and history, as well as instructions on how to acquire them.

We made this list based on our personal choice. However, we researched heavily and talked with many Warlock players about their transmog ideas. And most of them agreed with our rankings. But putting on a transmog is a personal thing and you should go for whatever you like the most. We’re just happy to help!

It Is Never Too Late to Start Playing CS:GO