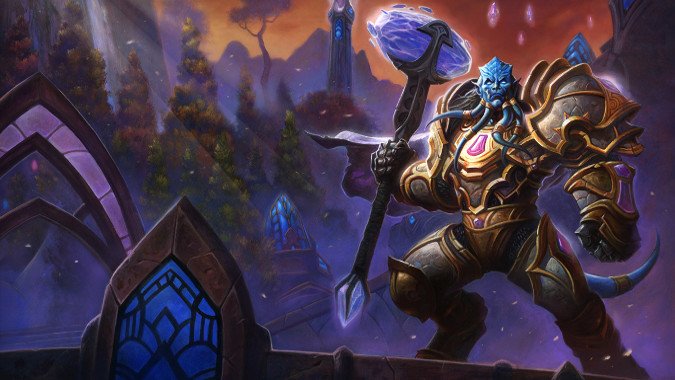 Paladin is easily the shiniest class in World of Warcraft when it comes to transmog sets. The general appearance of this class is often golden, with silver and purple sets here and there. The Blizzard’s idea when designing armor sets for Paladins is usually to symbolize the class’s connection with the Light. The Light is the source of all Paladin abilities in WoW, so it’s a key element to feature.

Unlike the other plate wearers, such as Warriors and Death Knights, the Paladin class doesn’t always look brutal and aggressive. In fact, many of the Paladin transmog sets that people like are actually simple and elegant, with decorative gems, feathers, and even robes.

Here we’ve collected the top 15 best transmog sets for the Paladin class and ranked them accordingly. We took into consideration how the outfits look at first, but also what is the history and significance behind them and how easily you can obtain them in-game. Needless to say, this is the complete guide for choosing a transmog for your Paladin in Shadowlands!

For those that are new, the transmogrification system in WoW allows us to change how our gear looks. All items can be altered individually or collectively by acquiring an entire set. Simply follow our notes on how to obtain the item sets on this list if you’d like to transmog them on your character.

The Fierce Combatant’s Plate Scaled Armor was the starting PvP gear in the last patch of the Legion expansion. During this time, we visited Argus, the home of the Burning Legion, and teamed up with the Army of the Light. And while all classes received similar armor sets to this one, Paladins had the biggest connection to it.

The Fierce Combatant set features golden gems and fractures of the fallen Naaru – Xe’ra. They appear very bright in-game and they float around the shoulders and the helmet. If you weren’t around that time and want to know more about how Xe’ra affected this transmog set, watch what happened to her!

Battlegear of Guiding Light isn’t your typical Paladin outfit. Instead of the bright golden hues, here we have floating blue jewels all over the shoulder pads and helmet. The base design is bulky and fit for a melee fighter, but the additional features enhance it to appear magical.

This isn’t the easiest set to collect because Blackrock Foundry is a pretty long instance. However, we recommend you start farming it right away since there aren’t too many Paladin players rocking this transmog. Keep in mind that the Normal and the Heroic version of the set are less glorious, but they follow the general design.

13. Watch of the Ceaseless Vigil

Watch of the Ceaseless Vigil is another untraditional example among the transmog sets for Paladin. It doesn’t feature any Light elements and it isn’t bright at all. In fact, the outfit is made out of heavy armor plate fit for seasoned warriors. The helmet looks particularly scary, but the shoulder pieces are the main elements here. They move up and down as if parts of some deadly machinery. Both of them are blazing with fire, which is another unique characteristic of this set!

This set comes from the Hellfire Citadel raid in Draenor on Mythic difficulty and you can collect it pretty quick.

The Paladin aesthetics are often described as divined and holy. Well, the Battleplate of Radiant Glory gives those ideas a form and you can see them right there on the image. Silver wings adorned with gold – all a Paladin can ask for!

Battleplate of Radiant Glory comes from the Dragon Soul raid, the instance where we defeated Deathwing. Here we’ve chosen the Normal variant of the set, simply because it looks better in-game. But you can also go for the Heroic version if you like it more!

With the launch of Shadowlands, the Sinful Gladiator’s Plate set was introduced to the game as well. This is the elite version of the PvP gear set during the first season of the Shadowlands expansion. Only high-ranked plate wearers, such as Paladins, could obtain it, so it’s kind of a special edition.

Despite its death features, the Sinful Gladiator’s Plate is surprisingly fitting to the Paladin aesthetics. It’s entirely covered in silver plate, with golden lights escaping the shoulder pads and the helmet. Yes, it’s practically impossible to obtain it now, but those players that did it originally now have one of the best Paladin transmog sets in the entire game.

10. Battlegear of the Lighting Emperor

Unlike Shamans, Paladins have never had any connection to storms and lightning. However, with the launch of the Throne of Thunder raid in Mists of Pandaria, many classes received such armor sets. And the Paladin version of that was the Battlegear of the Lighting Emperor.

Along with the general theme of hat expansion, the Battlegear of the Lighting Emperor looks both imperial and impressive. It’s certainly created to be worn by an army commander or other significant fighter. The Heroic variant of the set is by far the best one with its blue and golden mix!

But Paladins have never been associated with fire neither. However, with the Firelands raid in Cataclysm, Blizzard saw the opportunity to make such an outfit that would make Paladins look like Fire Mages! And we’re forever thankful for that!

The Battleplate of Immolation is a one-of-a-kind look for Paladins for two reasons. First, the set allows Paladins to wear robes instead of breastplates. And second, it’s the only set in the game with fire elements and features that Paladins can wear. So it’s definitely a worthy investment of your time!

Blizzard often portrays Paladins as winged and angelic champions. They’re the guardians of all that is good in Azeroth so it’s quite fitting for them to be glorified, right? Well, the Vestments of Winged Triumph is one of the best Paladins transmog sets you can get for that occasion!

The best part about this set is actually the helmet. It features bright blue feathers in the shape of wings. Depending on your chosen race, this helm might even appear bigger than your character’s shoulders. The Siege of Orgrimmar isn’t the longest raid for soloing, so we definitely recommend you run it!

If you could ask a Paladin player about one expansion that had the best transmog sets for their class, then they would always answer Legion! Legion was the last expansion when tier sets were still a thing in WoW and Blizzard simply made them look gorgeous!

Well, Battleplate of the Highlord is the first set that Paladins could obtain that expansion. The item pieces come from both the Emerald Nightmare and The Nighthold raids. Once collected, the set becomes a glorious armor that only a proper Highlord should wear. Towering shoulders pads, radiating helmet, and a golden robe with crimson streaks – simply perfect!

In the good old days where all we know about the Legion came from the Burning Crusade expansion, Paladins had another transmog set that they wanted to wear more than any other – Crystalforge Armor. It came from the Serpentshrine Cavern instance, the first serious raid that players could clear after vanilla.

Crystalforge Armor is an outfit entirely covered in purple. Only the helmet and the shoulder pieces resemble gems the likes of which we can see around Netherstorm and the Naaru in Shattrath City. It’s quite a unique armor set, especially for its time. And that makes it worth farming!

But we can’t talk about Burning Crusade and Paladins without mentioning the Lightbringer Armor set. Black Temple was the most important raid during this expansion and the Paladin class had the best dress for the occasion.

The golden shoulders radiating light, the impressive crown made out of three yellow gems, the sleek design of the breastplate and leggings – everything is absolutely brilliant. Paladins were one of the most popular classes during the days of Burning Crusade and those that had the Lightbringer Armor set were inspirations to others!

In the second patch of Legion, Blizzard opened up the gates of the Tomb of Sargeras raid. Thematically, this was a similar scenario to when players confronted Illidan in his Black Temple. And because of that, all the class tier sets from BT were reworked and modernized. So Paladins got the Radiant Lightbringer Armor.

We can’t say whether the original Lightbringer armor or the Radiant Lightbringer Armor is a better option. While the first one really cemented itself in the foundations of the Paladin aesthetics, it’s a bit outdated. And the Radiant version is all HD, polished, and simply glorious. It’s easily one of the brightest outfits in World of Warcraft, so make sure to farm it!

Wrath of the Lich King was the first expansion where Retribution Paladins would truly shine. This increased the popularity of the class, which was already high due to the effectiveness of the Holy and the Protection specs. And in the very last patch, Blizzard gave us the Wrathful Gladiator’s Scaled Armor set!

For most Paladin players, this is the transmog set that is closest to their hearts. It might not be the flashiest or the brightest outfit in the game, but it’s perfect as it is. The base design is colored in beautiful silver, with streaks of gold decorating the top half. The shoulders are bulky and dominating while the helmet is compact and mystical. Truly legendary!

Nowadays the set only costs 12 Marks of Honor and you can purchase it today from the PvP vendors in Dalaran, Northrend.

When we said that the Legion expansion was the best one giving the Paladin class the best transmog sets, we really meant it. On the last patch, Blizzard added the Light’s Vanguard Battleplate as a reward for players that raided Antorus, the Burning Throne on Mythic difficulty. And this was the very last class tier set that Paladins saw in a long while!

Light’s Vanguard Battleplate is everything you can ask for in a Paladin outfit. It’s big, assertive, and glorious to behold. It features wings and other angelic elements. And it’s covered in peaceful white and holy gold! This is one of the most impressive sets in the entire World of Warcraft, so it’s better to start farming it today!

Collected by: looting the gear pieces from the Blackwing Lair raid.

When people think of Paladins in Wow, this is how they imagine them! The Judgement Armor is the absolute best transmog set for this class and the closest Blizzard has come to perfection! There isn’t a single Paladin player that isn’t in love with this outfit or that’s not farming it on a regular basis.

The Judgement Armor is a robe-styled set that is uniquely designed and colored, at least for the time it was created. Everything from the headpiece to the boots is intact and every part fits all the rest. The traditional golden coloring started here, combined with red and white, but also black. We aren’t sure why, but Blizzard never repeated this idea again. And Judgement Armor is the only example of Paladins wearing a black suit. Quite fitting for a judge…

Judgment Armor comes from the Blackwing Lair raid. This was the second instance that players raided during vanilla, so it was quite a surprise for many Paladins to find such a glorious set for their characters. Nowadays you can farm it alone pretty quickly.

And those are the top 15 best transmog sets for Paladins in WoW!