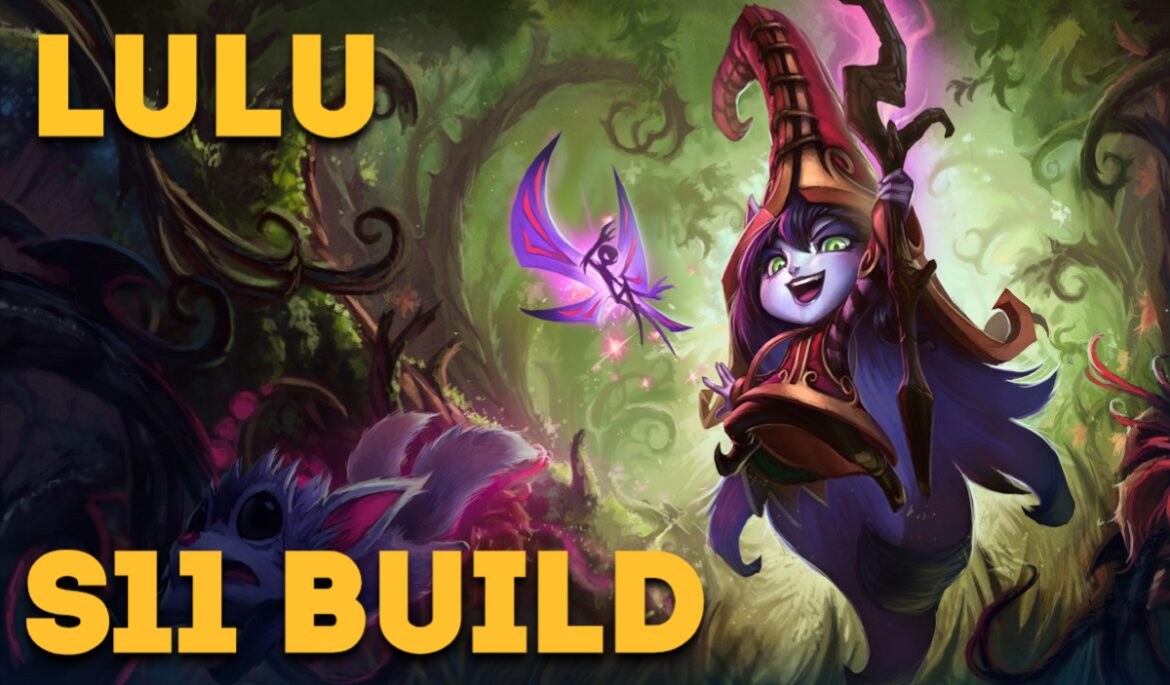 Home » What is the Best Lulu Build in LoL? – Runes, Items, and More!

Hello there! This page is an in-depth guide on the best Lulu build currently in League of Legends. Here we’re talking about the runes, items, and Summoner’s Spells that have the highest win rate on this champion. And by the end of this post, you will know how to play Lulu, the Fae Sorceress.

Whenever the meta introduces a high-burst environment on the Summoner’s Rift, enchanter supports are in high demand. One-shotting mages and assassins are played in every role in season 11, so supports are expected to protect their carries with shields and heals. And one of the best champions for this job is Lulu!

Lulu is an extremely popular pick in the bot lane. At the time of writing, she is considered an S-tier support, with a 15% pick rate and over 50% win rate. Her toolkit offers both an offensive and a defensive playstyle which you can shift between game to game. And because of that, she is an excellent champion to main if you’re looking to climb in solo-queue.

The Lulu build that we’re discussing here is mimicked by all the high elo support players worldwide. We’re gathered enough data to showcase why some runes and items are prioritized over others, as well as how best to use them in-game. We will also talk about the best ARAM build for Lulu, which is also based on a high-elo play on all servers.

So without further ado, let’s check the runes and items you build on Lulu in League of Legends!

Lulu is a flexible champion when it comes to keystones. She can perform very well with a number of different ones, but the highest winning keystone for her is Summon Aery. This is a very reliable option because you can use it in two ways – aggressively and defensively. When you assist an ally they get an extra shield. And when you strike an enemy Aery damages them too.

And that is precisely the reason why you should always build Summon Aery on Lulu. For example, if you choose to play with Guardian, you’re limited to being defensive. Meanwhile, if the matchup allows, you can continually use Aery to poke the enemy carry out of the lane.

The next rune to take is Manaflow Band. It’s a very useful source of mana regeneration, especially if you know how to utilize it. If you’re playing the game with Manaflow Band, you need to track its cooldown on your UI. And whenever it is ready, you should be looking to poke or damage your opponents. This will give you max stacks early on and increase your mana pool!

On the third row of the Sorcery tree, we have Transcendence. This rune is simply amazing and it’s probably one of the most broken ones in season 11. Shortly put, Transcendence grants you 5 Ability Haste on levels 5 and 8. On level 11, however, it resets the remaining 20% of your basic abilities whenever you get an assist or a kill. By the time you reach this point the mid-game is already happening, so having a low cooldown on your shields, speed buffs, and polymorph is massive. So always build Transcendence on Lulu!

As a last rune here, you can always choose Scorch. It is an offensive option that helps your damage in the laning phase. Scorch does quite a bit of damage early on so don’t be afraid to use your Q for procs. It can be great for securing kills and overwhelming the enemy ADC when trading back and forth.

The secondary runes for Lulu are standard. You always want to take Inspiration, and specifically Biscuit Delivery. Lulu is a squishy champion without her ultimate ability, so being to regenerate the damage you take is fantastic. Biscuit Delivery will give you three enhanced potions that regenerate both health and mana. They’re easy to use and they don’t cost any gold.

And for conclusion, we have Cosmic Insight. This rune is simply a Haste bonus, especially on your items. We will talk in a bit why Item Haste is actually very important on Lulu, but for now check this box in your Lulu rune build and forget about the rest.

As you can see, this is a very balanced rune page. It’s very reliable and you don’t have to change a thing in most matches that you play. And as for the bonuses, it’s best to go for two Adaptive Force runes and one Armor/Magic Resist, depending on the situation at hand.

There is a good amount of diversity when it comes to the support mythic items. You can experiment with most options on Lulu, but the strongest choice by far is Shurelya’s Battlesong. This is just an upgraded version of the regular item from the previous seasons. It provides Lulu and her allies with a burst of movement speed and it is currently on a 75-seconds cooldown. It’s useful in a number of scenarios, both for running away or engaging in a fight.

Note that Moonstone Renewer can be a viable mythic item on Lulu too. However, she has enough healing and shielding power in her kit, so the item doesn’t help her too much. So, you’re better off with Shurelya’s Battlesong.

Since the dawn of time, Ardent Censer has been one of the best items for Lulu. It improves her strongest point by granting her 10% Heal and Shield power, as well as mana regeneration and Ability Power.

The item’s passive is another brilliant reason why you should purchase Ardent Censer early on. It enhances the attacks of your shielded teammate to deal on-hit magic damage. It’s a DPS increase and it’s always good!

Among the new support items in season 11, Staff of Flowing Water is one of the greatest. Riot Games already changed its passives a couple of times, but it’s still useful to any enchanter in the game.

Staff of Flowing Water now grants 20 Ability Haste for 4 seconds to your shielded ally. As you can imagine, for champions that depend on their abilities to deal damage, such as Lucian or Jhin, this is quite a massive boost. But it’s also great for supporting mages in the bot lane, or your AP mid.

With so much damage in the game, Mikael’s Blessing is almost a must in every game. It usually takes one stun to kill pretty much anyone, so having the option to avoid this is very good. The best thing about Mikael’s Blessing that you can use it on both yourself and your allies. It does have a long cooldown of 120 seconds, but it can be the key to winning a late-game team fight.

But damage isn’t the only thing that’s exceeding the borders of normality in season 11. Healing is as much potent as is DPS, with nearly all champions having some sort of passive self-heal. Well, Chempunk Putrifier is the best way to counter this as a support, so we highly recommend you to build this item on Lulu. It provides you with a Grevious Wounds effect of up to 60% and you don’t even have to hit your opponent to activate it.

And lastly, the boots upgrades! Ionian Boots of Lucidity are the cheapest and the most useful boots for most supports, including Lulu. The amount of Ability Haste they provide in the early game is absolutely insane and you should definitely take advantage of it. It will put your abilities on a significantly lower cooldown, so you can be more useful to your team right away!

Do you want to learn how Nuguri plays his Kennen? Check out this guide!

There are a lot of support items that you can include in your regular build and they all depend on the situation at hand. For example, Knight’s Vow can be an answer when facing an assassin who’s constantly trying to kill your ADC. The item will redirect some of the damage to you and you won’t have to stress about keeping them alive.

Similarly, Redemption is a good AoE heal that you can use even while being dead. It might not be the strongest choice, but it’s definitely worth buying.

On the other hand, Lulu’s abilities scale with Ability Power. So the more AP you’ve got, the stronger your shields are. If you’re playing one of those games that go on for more than 40 minutes, Rabadon’s Deathcap can be very good purchase.

It’s very easy to choose Summoner’s Spells for Lulu. The only two viable options are Flash + Ignite and Flash + Exhaust. Obviously, Ignite is always better if you’re going aggressively in the lane and trying to get kills. And Exhaust is better when playing defensively and protecting your ADC.

The skill order for Lulu has changed a few times over the years. At the moment, the best way to level up Lulu’s abilities is by first maxing your E. It isn’t only because of the improved shield, but also the higher damage. Remember than E is a point-click ability, so you don’t have to hit skill shots in order to deal damage in lane. Here is an example of how the skill order should look like.

You have many ability combos as Lulu. This is further backed up by the fact that your E and W can be applied on both allies and enemies. The main thing here is to have an idea of what you’re trying to do with Lulu while you’re playing. Sometimes it’s better to polymorph the enemy assassin instead of speeding your carry. And sometimes shielding your teammate is better than dealing damage. However, here are a couple of combos you should be aware of on Lulu.

Broxah is stomping with Lee Sin! Learn his build here!

When you’re playing ARAM as Lulu, your build can be quite different. You’re free to experiment with different mythics and our favorite one is Moonstone Renewer. This item is great for team fights which are constantly going on here. It passively heals allies whenever you are combat, so you can get a big value out of it.

Another important item in this ARAM build for Lulu is Chempunk Putrifier. As we mentioned above, healing can be quite a problem to deal with in League of Legends, so having Grievous Wounds is a must.

Other than that, you can go with AP items such as Rabadon’s Deathcap or Lich Bane. They will increase your damage output and also the power of your shields.

For more info on the Lulu build, watch this YouTube video!