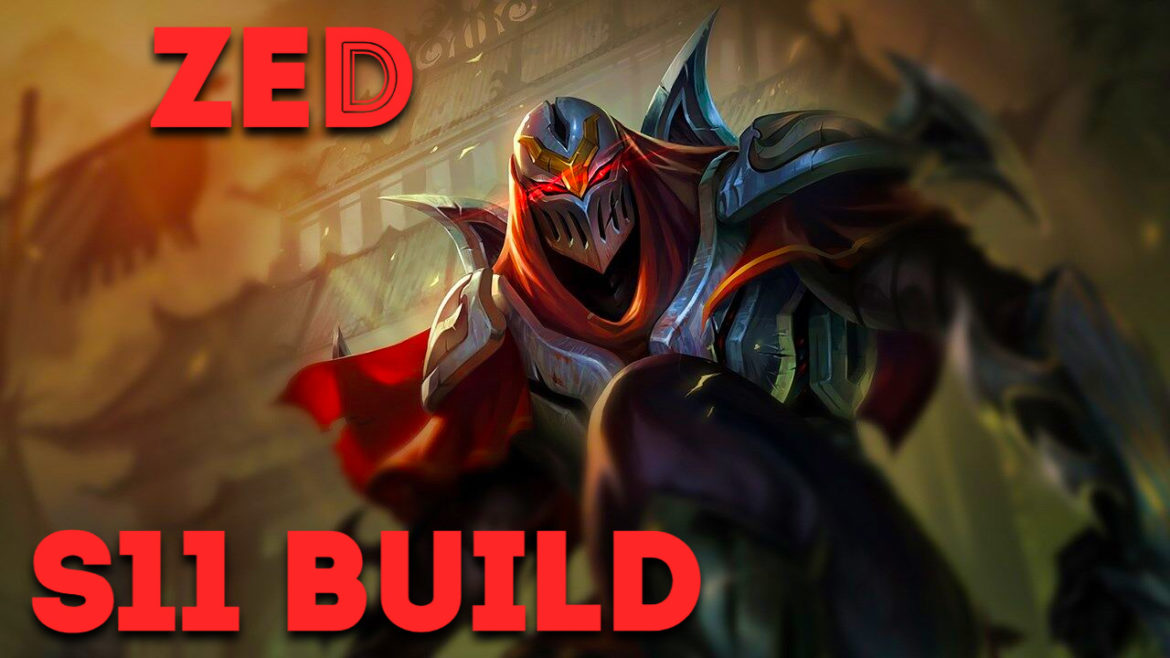 League of Legends Zed Build for Season 11 – The Ultimate Guide

Welcome to our complete guide on the best Zed build in season 11 of LoL. Here we will take a deep dive at which runes and items you should play Zed with. We will also discuss other strategies and ability combos that you should practice. And finally, we will take a look at the best ARAM Zed build! Let’s begin!

Zed is one of the champions that benefited the most from the mythic item changes in season 11. As you may know, League of Legends is currently swimming in assassins, not only in the mid lane, but in the jungle and top as well. The reason for it is the fact that the new items are simply too powerful. As a result, most champions can one-shot an enemy with an item or two.

And while this has been true for Zed since the moment he was introduced to the game, now it is more clear than ever. In season 11, Zed has an astonishingly powerful build. Given in the right hands, this champion becomes obnoxious and can carry games 1v9. There is so much raw damage and lethality in this Zed build that not even tanks are obstacles.

At the moment, Zed can be played with a few different mythic items. And we can safely say that all of them work great. However, we’ve chosen the one with the highest win rate – Eclipse and we’ll explain why it so.

Zed is currently one of the best champions to main in the game. If you can execute a clean laning phase and make picks around the map, you’re looking at some easy LP. But if you aren’t a Zed player yourself, here is how to begin.

This is the build you should focus closely as Zed in LoL!

Electrocute: This is by far the best-performing rune on any assassin, including Zed. The power of Electrocute can really be witnessed on this type of champions, so make sure to pick it up.

What makes Electrocute a go-to keystone in this Zed build is that it perfectly fits his playstyle. Whenever you execute any ability combo, the rune will strike the target with bonus Adaptive Damage. This comes in handy when trading in lane or slaying a squishy target later on.

Taste of Blood: Zed doesn’t have a great time when it comes to the laning phase. Sure, some matchups are easy, but most champions can bully him due to his short range and abscence of shields. Well, Taste of Blood can really help you preserve your health, at least until level 6. It provides Zed with a nice heal every 20 seconds, so it’s always good to have it in your build.

Eyeball Collection: Here is where you can experiment with things yourself. We have chosen Eyeball Collection since it’s the easiest rune to stack up. However, both Zombie Ward and Ghost Poro can be interesting runes to play with and they can provide extra vision besides the Adaptive Damage. Zed is a roaming assassin, so any of these runes is a good tool for him. However, you can simply lock Eyeball Collection and you will not miss any benefit whatsoever.

Ultimate Hunter: As for the last row of the Domination tree, Ultimate Hunter should be your permanent choice. Zed is extremely dependent on his ultimate to create plays around the map. Without it, he can feel like the worst champion in the game. Lowering the cooldown on this ability as much as possible will always be the number one priority of Zed players. And Ultimate Hunter is a very good tool that you should start abusing on Zed immediately!

Transcendence: The secondary rune page in this Zed build is Sorcery. The first rune is Transcendence and its amazing new power. You see, Transcendence was changed this season to grant Ability Haste on level 5 and 8. However, once you reach level 11, the rune will help you reset your basic abilities. This is extremely valuable in team fights later on in the game.

Scorch: And the last LoL rune we’re taking on Zed is Scorch. This is simply a poking tool that you will mostly benefit from during the landing phase. It does good damage early on but falls behind in the late game. Its main purpose is to help you secure kills, so be sure to pick it up as well.

As you can see this LoL build for Zed is very offensive. Everythin revolves around executing clean combos and slaying one target before a fight is even begun. And this is how you should think when playing Zed. Which champion should I eliminate from the game?

That said, let’s check the items that you should be running as Zed in LoL!

Eclipse: The mythic item that you should prioritize in most games is Eclipse. This a fantastic new addition to the game, especially for Zed. It does a couple of things, all of which are brilliant on this champion.

First of all, Eclipse’s raw stats are amazing – Attack Damage, Lethality, and Omnivamp. Additionally, the item grants you bonus damage, movement speed, and a shield every time you strike an enemy with 2 separate attacks. Keep in mind that this effect has only an 8-second cooldown, so it’s very powerful throughout the game. And the bonus armor penetration from the mythic passive is excellent as well.

Serpent’s Fang: With so much healing and shielding in League of Legends at the moment, Serpent’s Fang is your next best item. It works similarly to the Grevious Wounds items which reduce the healing of your opponent. The only difference is that whenever you hit a champion with Serpent’s Fang in your inventory, the shields on them will be significantly weaker.

This item is the ultimate answer whenever you’re playing against supports like Lulu, Taric, or Janna, or mid laners like Orianna or Diana. So always build Serpent’s Fang on Zed!

The Collector: And similar to Zed’s R, The Collector also executes a target but only if they’re below 5% HP. If you’re a Zed player, then you know how frustrating it is to land everything on an enemy and they still end up surviving it with a sliver of health. Well, The Collector will help you secure those kills most of the time, making it very difficult to leave it in the shop.

Edge of Night: As the fourth item on Zed, we highly recommend you to build Edge of Night. This is the AD equivalent of Banshee’s Veil and has the same purpose and cooldown as the latter. So, Edge of Night grants you a magic shield that will break if a direct spell hits you (AOE spells don’t break the shield). This will help you go in and out without a problem. Being caught in a CC is one of the worst feelings when playing Zed, so always build Edge of Night as an answer to that!

Serylda’s Grudge: And whenever you’re playing Zed, chances are that your opponents will build armor. Well, Serylda’s Grudge is one of the best ways to counter this. The raw armor penetration of this item is simply amazing and can help you shred a tank in a couple of seconds. However, the slow effect of its passive is another bonus that should not be forgotten. It can help you land your abilities or catch up with the enemy.

Ionian Boots of Lucidity: Despite other valuable choices, Ionian Boots of Lucidity are the best boots to go for on Zed. They are simply way too good for their actual price. You get 20 Ability Haste for a total price of 950 gold. And when you consider the fact that you can buy them on level 5 or 6, the choice becomes a no-brainer!

The Zed item build that we’ve shown here can vary slightly, depending on the game. At any time, you can swap Edge of Night for Black Cleaver or Serylda’s Grudge for Lord Dominik’s Regard. However, even if you don’t change a thing and follow the guide closely, you’re still looking at an extremely powerful build for Zed.

Another thing is the mythic items as well. As you can see, you can also go with Duskblade of Draktharr or Prowler’s Claw. Keep in mind that both of these items work flawlessly on Zed. But the additional tankiness of Eclipse makes it the ultimate winner here.

And lastly, when you’re facing a team full of crowd control abilities, Mercury’s Treads is the boots upgrade to go for!

When playing Zed, you don’t really think too much of Summoner’s Spells. Generally, most players take Flash and Ignite in the majority of their games. However, Teleport can help you a lot in certain matchups, like Twisted Fate.

the best combination for most games.

when you can’t kill your enemy laner or you’re playing against global ultimates.

Zed has a very straightforward way of maxing his abilities. Q is most important spells, so you always want to max it first. E is the next line, and W is the last. Obviously, you should rank up your ultimate whenever you can as well.

Besides his ultimate, Zed’s Shuriken is the key to all Zed’s combos in the game. This is your highest damaging tool without even considering the fact that you can throw two or three Qs at the same time. As you can see in these combos, everything revolves around slowing your target and throwing your Qs. You always want to apply R or E first, just to make sure that the Q lands.

Here are a few combinations to give you the right idea of what you should be doing on Zed:

poke combo for trading in lane.

applying R and calling a shadow to maximize the damage.

assassinating an enemy from a far.

As far as ARAM is concerned, the Zed build must include Duskblade of Draktharr. Unless you’re going against 4 or 5 tanks and you absolutely need Eclipse, the better option would always be Duskblade. This is because the items is extrelemy good in chaotic situations and you can finish off your opponents one by one.

Another thing to mention in this ARAM Zed build is the situational items. Don’t be afraid to go for Maw of Malmortius or Silvermare Dawn. These defensive tools can help you survive difficult moments and overcome them. Additionally, you can also include some off-build items like Infinity Edge or Gargoyle Stoneplate depending on the situation at hand.

Do you want to learn how to play Samira like Doublelift? Use his build!

Zed has been pretty absent from pro play for a long time. And we understand why – assassins are generally risky picks in professional environments. Pros play very safely in important matches. And the absence of the chaos of solo queue can really make Zed and similar champions struggle. The last time we witnessed Zed was season 3 or 4. And we have yet to see our new mid laners play him on stage.

However, if you want to improve your Zed skills, here are two players to follow closely:

Which Legendaries to Craft for Your Warrior in Shadowlands? – The Ultimate Guide