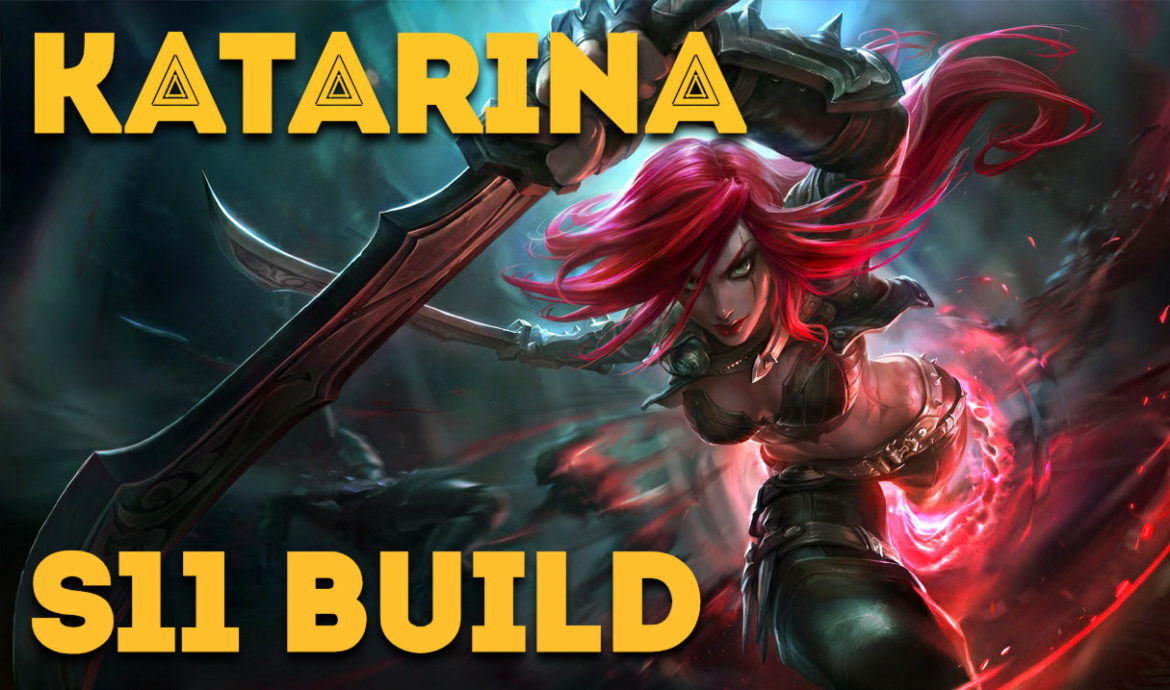 Welcome to our Mid and ARAM guide build for Katarina in LoL! This post will cover the best runes you should run on this champion, as well as the items. We will also take a look at what makes Katarina such a strong pick in the mid lane and how you should execute her ability combos. Let’s begin!

This champion is in a great spot in season 11. Katarina is currently one of the best-performing solo queue champions in LoL, with a powerful build that can carry games 1v9. And while this has been true for the other seasons as well, the addition of mythic items has sincerely made her excellent.

At this moment, on patch 11.11, this Katarina build has the second-highest win rate in LoL among the other mid laners – 51.21%. And her pick rate of 9.46% is another indicator of how popular this strategy is among all elos of play.

Prior to season 11, Katarina struggled with most matchups in the mid lane. She is an extremely vulnerable champion in the early game, with no defensive options other than her escape – E. This was enough to put her low on the priority ladder and many players forgot about her.

However, season 11 proved to be the season of assassins. And Katarina is currently a very powerful pick, especially against champions like Zed, LeBlanc, Kassadin, or Ahri. With this build, Katarina is able to one-shot anyone in LoL and carry the game by herself. It doesn’t matter if you have 1 million mastery points on Katarina or you’ve just started to play her, you can use this post to finally master her and win more games.

Let’s check the runes you should be running first!

The Katarina players are currently divided on which keystone works best for this champion. There are those that favor Conqueror and those that go for Electrocute. And while the first one offers more healing, the Conqueror rune page is what truly makes Kata exceptional in this meta.

The reason why Electrocute Katarina has such a big win rate is because of its initial high-burst damage. No matter if it’s a level 3 all-in or a team fight, Kata can easily proc this rune. It’s really a cornerstone to almost any assassin in the game, including her. So, always build Katarina with Electrocute in LoL!

The second rune that you should always have is Sudden Impact. Its effects are pretty simple, yet very powerful if you know how to utilize them. Sudden Impact grants you Lethality and Magic Penetration after you jump with your E or exit a brush. But what’s phenomenal here is that the rune has only 4 seconds of cooldown.

Essentially, Katarina gets a burst of Magic Penetration and Lethality with every second or third jump. This is a huge boost to her damage, especially early on. And she is one of the few champions that has such high usage of this rune!

On the third row of the Domination tree, Eyeball Collection is your best bet. It will passively increase your Ability Power, without you having to do anything. However, keep in mind that you can also go for either Zombie Ward or Ghost Poro. These two runes are great for roaming, so if that is your preferred playstyle, choose one of those!

And lastly here, we have Relentless Hunter. Katarina was recently hit with a base movement speed nerf. It was an intentional choice by Riot done to keep her more in the mid lane and less elsewhere. For that reason, we go for Relentless Hunter. It increases your out-of-combat movement speed based on stacks you get by slaying enemies. Pretty straightforward but much needed!

As for the secondary runes, you should go for Precision. And the first important decision there is Triumph. Triumph is another vital rune for this Katarina build in LoL, simply because of how much value it provides. It heals for a small portion of health when you score a kill or an assist and doesn’t have any internal cooldown. Katarina is very dependent on self-healing for survival in team fights, so this is the best choice we’ve got here.

Coup de Grace is a damage buff that takes effect only after your target reaches 40% HP. It’s really a nice tool for any champion, including Katarina. As an assassin in League of Legends, your main priority is to eliminate on target as soon as possible. And with the benefits of Coup de Grace, you get closer to that ideal.

As you can see, this is a very well-rounded Katarina build in League of Legends. You get extra procs of damage and self-healing, making your all-ins really scary. It might take a few games to get used to the playstyle, especially if you’ve been playing Conqueror Katarina for a long time. However, it’s well worth it and you can have tons of success with it!

Do you want to know how Spica plays jungle Graves? Check the build here!

Since the beginning of season 11, Katarina has been played with many different mythic items. Kraken Slayer, Night Harvester, and Riftmaker are the mythic items that most players went for in the past patches. However, the new and stronger option now is Hextech Rocketbelt.

Riot Games reworked Hextech Rocketbelt’s passive and it now grants Magic Penetration for each legendary item bought. On top of it, the item offers fantastic stats for Katarina, namely Ability Power, Health, and Ability Haste. The added active dash is great for both gap closing and triggering Electrocute, or running away from sticky situations.

The next most important item in your Katarina LoL build is Nashor’s Tooth. Kata benefits a lot from this purchase and it’s usually considered the best first buy. But it’s totally up to you whether you’ll build Nashor’s Tooth or Hextech Rocketbelt first, because it is all situational. Nashor’s Tooth offers more damage early, and Hextech more utility.

Another thing that can heavily influence your game is Mejai’s Soulstealer. It’s absolutely vital for Katarina to either win or go even in the early game, just so she could take advantage of this item. The stacks that you collect do add quite a bit of AP and Movement Speed, so they can help you snowball the game. We highly recommend you to start every match with Dark Seal and Refillable Potion and to upgrade it later into Mejai’s.

For a squishy assassin like Katarina, Zhonya’s Hourglass is the best defensive option available. It grants Armor and Ability Power, and an active that helps you dodge important spells and survive team fights. This is the go-to item against any AD assassin in the mid lane, or AP mages like Lux, for example.

And Rabadon’s Deathcap is the finishing touch in your Katarina LoL build. This item has a very simple mission – to double your AP at the end of the game. After purchasing RA, Katarina can solo team fights and close games right away. Combined with all the accumulated Magic Penetration thanks to Hextech Rocketbelt, this is the recipe for destruction on Katarina.

And speaking of Magic Penetration, Sorcerer’s Shoes are your best boots upgrades on this champion. Katarina doesn’t need much Ability Haste, nor Movement Speed (her passive resets the rest of her abilities). But MP is something you’re looking to get from every item, so Sorcerer’s Shoes are the natural choice.

Keep in mind that you can also go for Mercury’s Treads or Plated Steelcaps on Katarina. The first choice is great against a heavy CC team, while the second against multiple AD threats. But in both cases you’ll want to swap one of the regular items for a Void Staff.

Interested in how ShowMaker plays Katarina? Check his build!

When it comes to situational items for Katarina, nearly everything can be thrown in. Mainly, you’ll want to stick to Void Staff and Morellonomicon as your best offensive options. And similarly, Banshee’s Veil and Mercury’s Treads should often be purchased when need defensiveness.

However, Katarina is one of those champions that work well with any item. And it’s no surprise that you can get Lich Bane, Demonic Embrace, and even Guardian Angel if the situation requires. All we’re saying is that you shouldn’t be too careful when purchasing items outside of this core LoL build for Katarina. Everything can be made to work!

As Katarina, you have two combinations of Summoner’s Spells that work great, and one that is highly situational.

First of all we have Flash and Ignite. This should be your starting combo if you’re still learning Katarina. Flash is the best Summoner’s Spell in the game, with Ignite the most offensive one.

Similarly, Ignite and Teleport are also fantastic. We recommend this for advanced Katarina players, because the absence of Flash can really trick many players.

And lastly, Exhaust and Teleport is very good whenever you lane against Zed, Yasuo, Talon, or Yone. These champions are very difficult to 1v1, so you need all the help you can get.

the easiest choice in most games.

useful against assassins and to your own team.

The skill order is very simple for Katarina. Early on, you want to prioritize your Q over the rest of your abilities. This will maximize your damage during the laning phase and the first objectives. Alternatively, you can also max out your E first, but won’t be as good as the first option.

Despite the unique playstyle, Katarina is a very easy champion to master. She only has a couple of combos that you need to know how to execute. Sure, there are many ways you can do your DPS as Katarina, combining your abilities and Summoner’s Spells. However, these two combos are the most basic and the most used ones, so we recommend you to practice these three combos on custom or normal games.

speeding up yourself and doing an all-in.

In ARAM, things are a bit different with the LoL Katarina build. The most important change here is Night Harvester in the place of Hextech Rocketbelt. The reason for this is because ARAM is such a chaotic environment and you need Movement Speed to either dodge spells or catch up with the enemy. The rest of this build revolves around on-hit damage and much AP.

Note that you can also go with Riftmaker instead of Night Harvester, especially if you’re against multiple tanks. This item will help you deal more damage overall and survive for longer periods of time.

Doublelift is destroying the NA Challenger with Kog’Maw! Click here to learn how!

Is Katarina Still Good in LoL?

Yes! As we mentioned in our intro, Katarina is currently an S-tier mid lane pick. She goes well in most matchups and struggles only in a few. And thanks to the changes in the items, her power spikes come much faster than in the previous seasons. As a result, Katarina can easily reach a power point when she can influence the game in her direction.

If you’re looking to pick up Katarina in your champion pool this season, you won’t regret it! Use this build increase your chances of winning and conquer solo queue! GLHF!

LoL Leona Build for Season 11 – Learn How to Play Leona!