Home » League of Legends Champions in Arcane: A Comparison of Key Characters

League of Legends Champions in Arcane: A Comparison of Key Characters

League of Legends (commonly referred to as “League”) is a multiplayer online battle arena game developed by Riot Games and released in 2009. Here, a player chooses a champion with different weapons and abilities; the players of each side battle each other until they destroy the “Nexus” of the enemy base to secure a win. The game has become continuously popular since its release, with new champions added to the roster over the years and becoming an official Esport in different competitions, including the Olympics.

In 2021, a series called Arcane, based on the fictional universe in League was released. It mainly follows the story of sisters Vi and Jinx but also features other champions that are familiar to League of Legends players. Upon its release, the show was highly-rated among different platforms, with it appealing not only to fans of the game it was based on but even to others who have no idea what League of Legends is all about. The show made waves on social media and got people talking about the main characters, including famous lines that some wish to hear on Ownage Pranks.

After the first season ended, the show’s creators announced that a second season was already in production. The fictional universe of League is just as fascinating as the stories we see in the show. So, while waiting for the next season to come, you can familiarize yourself and read more at BoostRoyal, if you’re not sure about the champions who make an appearance in Arcane. To help, here’s a comparison between the main characters in Arcane and their counterparts in League of Legends,

Warning! Spoilers (and potential spoilers) are ahead! One of the main protagonists in Arcane, Vi is one of the champions you can play in League of Legends. In-game, Vi is described as a “hotheaded, impulsive, and fearsome woman” who solves her problems through fighting, which is pretty similar to the Vi audiences are introduced to in Arcane. In addition, both versions present Vi as a former criminal, but in the game, Vi’s current profession is a “Piltover Enforcer,” working with other wardens.

In the game, she wears the Atlas Gaunlents as her weapons. However, we don’t get to see these in Arcane until the last part, where she gets a hold of what seems to be the gauntlets (slightly smaller than the ones in the game) after she meets Jayce. Vi’s main features are primarily similar as she has the signature pink hair and the “Vi” tattoo on her face in both the game and the show, although the latter is more noticeable in-game. The only thing that sets her apart is her outfit (including the presence of her goggles in the game), her slightly longer hair, and the fact that Vi from Arcane looks like she has a “friendlier” face compared to the tough one in League of Legends.

When she was first introduced in the game, there was no specific backstory to indicate that Vi is related to any other champion. Although when Jinx was added to the roster, her similarities with Vi and some of the dialogue had fans speculating that they are sisters. This was later confirmed by Riot Games in 2017. Arcane then sticks to this idea and develops an entire story about their relationship and backstory. 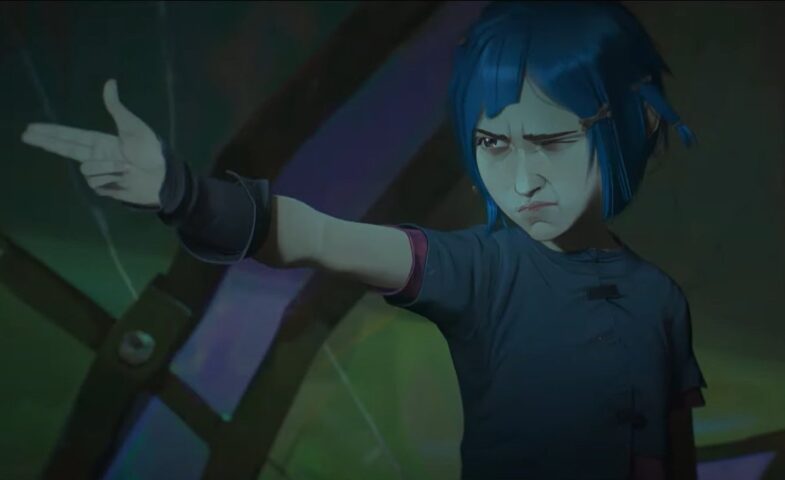 In League of Legends, Jinx is an infamous Zaunite mad criminal who brings chaos and anarchy wherever she goes. She is remembered as a tinkerer as a young girl, but it’s not revealed how she became the troublemaker champion that she is. This is what sets champion Jinx apart from the Jinx we’ve come to know in Arcane. Introduced as Powder, Jinx is further humanized in the show by addressing this gap to show her transition from the sweet Powder to the chaotic Jinx.

In the game, Jinx’s weapons include her minigun named “Pow-Pow” (which Arcane reveals to be Vi’s nickname for her), a shock pistol, explosive grenades, and her rocket launcher called “Fishbones.” The same ones make appearances in Arcane, among other weapons she designs herself. While Powder shows what she looked like as a child, Jinx from League is notably similar to the JInx in the show. Specifically, both versions have the same stylized cloud tattoos, blue braided hair, and punk street fashion. The only thing that makes them distinct (besides the eyebrows) is the belt that seems to carry ammunition, which is featured in the game design and not in Arcane. Another champion in Arcane is the finest peacekeeper herself, Caitlyn. Though both Caitlyn in League and Arcane are born from a wealthy family, her background and how she came to work as an Enforcer slightly vary. In the game, Caitlyn is born to a family of hextech artificers. Her motivation in becoming an investigator, and soon an officer of the Piltover Wardens, is mainly based on the attack on her family home.

This differs from the Caitlyn Kirraman introduced in Arcane, where she belongs to one of the ruling families in Piltover and is the daughter of a member of Piltover’s ruling council. In Arcane, Caitlyn rejects the elitist lifestyle she was raised in and prefers to explore the world independently. With that motivation, she joins the Enforcers at a young age and attempts to investigate the violence in the undercity. Otherwise, the personalities of Caitlyn, both in-game and on the show, are pretty similar.

In League, Caitlyn carries a large rifle, and her abilities include using a trap and net. Though she does carry a rifle in Arcane Season 1 (which she trades in for something to help Vi), it’s a different gun from the one she has in the game. The snap trap does make a brief appearance in Arcane, though. When it comes to her appearance in-game, Caitlyn wears what seems to be the Enforcer uniform, a dress, and her iconic top hat. In Arcane, she wears something similar at the start of the season though we see her wearing something different for the most part when she spends time in Zaun.

In the game, Caitlyn and Vi are considered partners, in the sense that they work together as Enforcers. This is different in Arcane, where it’s heavily implied that these characters have some romantic chemistry though they aren’t officially together. Arcane also reveals that Caitlyn and Jayce are good friends, which isn’t the case in League of Legends. Jayce (known as Jayce Talis in the show) is an inventor that works on hextech in both League and Arcane, with the champion and the character having a passion for progress and discovery in Piltover. His self-centered persona is also the same on both platforms, though it’s implied to be much worse in-game as other people have expressed.

However, his background story slightly differs between the game and the show. For one, Jayce gets a crystal from a mysterious man that saved his and his mother’s lives when he was young. This is what pushes him to conduct experiments using magic, much to the initial reluctance of Piltover’s council. This is different from the case in League, where he receives the crystal to experiment on only from the city council and after he’s already done other inventions. Additionally, in the game, Jayce is an apprentice of Clan Giopara; whereas, in Arcane, he is a scholar at the Academy in Piltover and is favored by Professor Heimerdinger.

Jayce appears to be more tan in Arcane than his fair-skinned counterpart in League, and his outfit is entirely different. We see him Arcane dressed in formal attire, while he sports some kind of heavy-looking armor in the game. He also carries the Hextech Capacitor, the giant hammer run by the crystal, in the game. Towards the end of Arcane, Jayce uses the same hammer as he comes with Vi to Zaun.

Besides his relationship with Caitlyn in Arcane, Jayce is friends with a co-worker named Viktor. The seeming friendship (at least in Jayce’s eyes) is consistent in the champions’ storylines in League of Legends, except it’s much more turbulent. Jayce and Viktor have disagreements in both the game and show’s storylines. Still, it’s much worse in League (because of Viktor’s questionable agenda – more on that later) as opposed to the friendship that lasts until the end of Arcane’s first season. 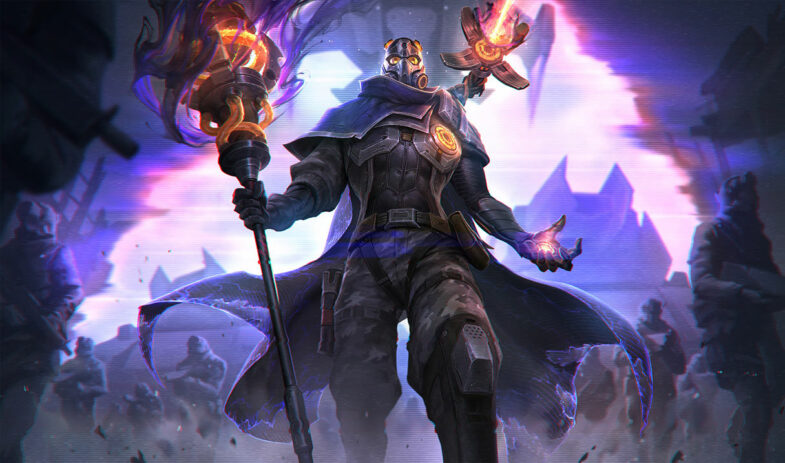 Finally, the last champion that plays a crucial role in Arcane is Viktor. In both the game and show, Viktor comes from Zaun and has the idealism and passion for helping people and addressing problems. Similar to Jayce, he’s also an intelligent and crafty inventor. He also goes to Piltover as a character and champion, but the circumstances slightly vary as the former works in the PIltover Academy as Heimerdinger’s assistant, while the latter was invited to go to the Academy by Professor Stanwick.

What makes Viktor in Arcane strikingly different from Viktor in League is that the former was born with a limp on his right leg and has a terminal illness. It’s this same illness that pushes him to dabble in self-augmentation using hextech experiments, much different from what he does in the game. In League, Viktor believes that human mistakes and emotions get in the way of achieving potential. To him, technology can be used to avoid such human errors and can significantly benefit humans despite the disregard for free will. It’s this mindset and many unfortunate events that happen to his life, including the rift between him and Jayce, that propels him to operate on himself and use mechanical augmentation. He then becomes obsessed with this twisted idealism to have a better world through technology that he calls the “Glorious Evolution.” This downfall isn’t seen in Arcane’s Viktor – at least not in Season 1.

As the game storyline suggests, the champion, Viktor, is already more machine than a human. He looks like a cyborg with a cool cape, and we can’t see his face as it’s hidden behind a robotic piece. This dramatically differs from the Viktor we see in Arcane. Before self-augmentation, Viktor is a white-skinned human with a skinny build and an unhealthy state. He walks around with a stick because of his limp. He does get some initial augmentations on his body towards the end, but this is entirely different from the machine-looking Viktor in the game.

Many other champions in Arcane are not included in the list, including Ekko, Heimerdinger, and Singed, among others. However, this guide only focused on the key characters that had a lot to do with the plot in Arcane’s first season. Though the writers and creators did change some parts about the characters, the champions’ backgrounds in League give us a glimpse of what we could expect in the next season. Whatever it would be, certainly, a lot of people are looking forward to everything else that is about to unfold.

DAMWON Gaming Team Spotlight: Who Is The Korean...