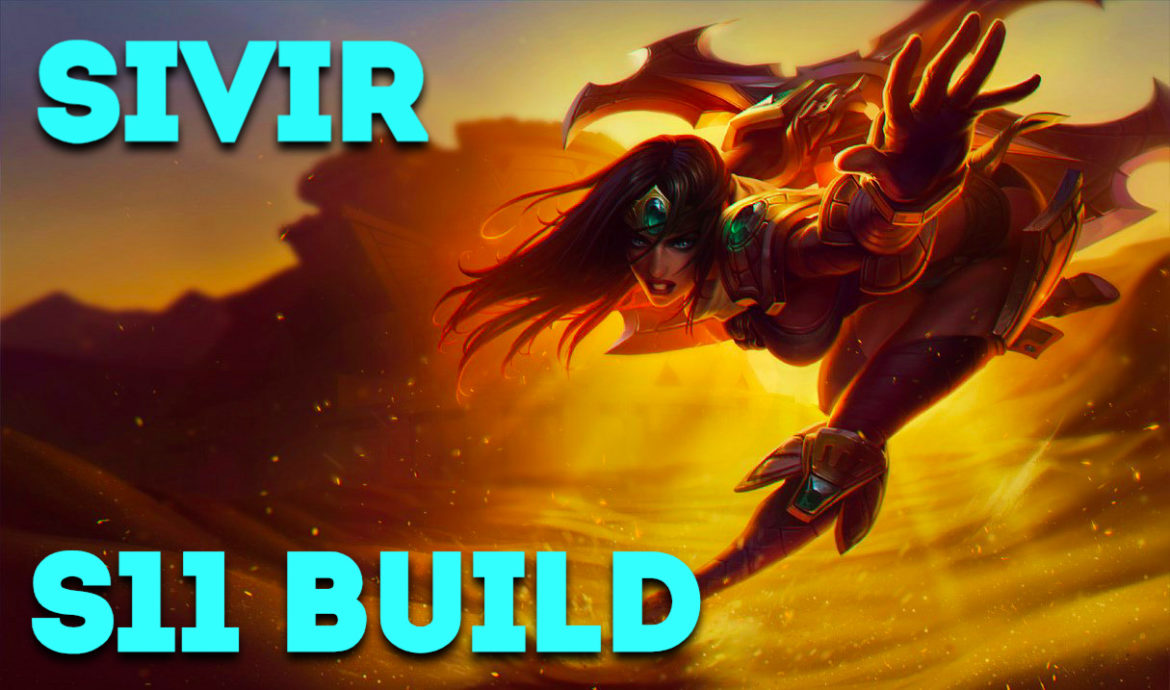 If you’re looking to increase your win rate as Sivir in League of Legends, use this guide! Here you will find the best build of runes and items for Sivir in season 11 of LoL. We will also be discussing some tips and tricks you can include in your gameplay. So let’s get going!

Sivir is one of the first ADC champions in League of Legends. Throughout her career as a marksman, she hasn’t received too many changes. Sure, a couple of tweaks to her abilities over the years, but that’s it. Her toolkit is very simple and straightforward, with no hidden mechanics between the spells. So the question remains: Why would anyone play Sivir in season 11 when there are such champions as Samira, Ezreal, or Kai’Sa?

Let us tell you why.

If you aren’t looking to be come a God of mechanical play in LoL and instead you want some fast ranked results – Sivir is the champion to go for. She has an insane AD ratio on her boomerang, making it one of the scariest abilities in the game.

Many players make the mistake of running this champion in the old way, like any other marksman. No, no, no. In season 11 of LoL, Sivir has a completely different build. This one revolves around poking with your Q and collecting Darkharvest soul.

The items that we want you to go for are all Lethality / Armor Penetration items, with a lot of Ability Haste as well. This combination will put your Boomerang Blade on a 3-4 second cooldown, while its damage can chunk up to 70% HP in one throw. Don’t believe us? Check this video out!

Now let’s dive deep into this Sivir build and see how it works!

Dark Harvest: The most important rune in this Sivir build is, of course, Dark Harvest. This keystone allows you to collect the souls of enemy champions once they’re below 50% HP. And the souls that you collect permanently increase the amount of damage you do those champions with Dark Harvest.

Simly put, once you have a couple of souls collected, you can start executing people from 50% health. We shouldn’t even mention that Sivir has a very easy time collecting the soul stacks, due to the long range of her Q. Dark Harvest is what makes or breaks this Sivir build in LoL. Without it, you’re forced to switch to regular marskman playstyle and focus on your auto-attacks instead of abilities.

Taste of Blood: In the second row of the Domination tree, we always pick Taste of Blood. First of all, Cheap Shot isn’t a reliable rune for Sivir because she doesn’t have a crowd control spell herself. And second, Sudden Impact only works on champions with dashes and gap closers.

On the other hand, Taste of Blood offers a way to regenerate health via dealing damage. This is very useful during the laning phase, especially if you’re playing aggressively.

Eyeball Collection: Eyeball Collection is the best damage increase in this row. It’s simple – you gain stacks by securing champion takedowns. Each stack grants you 1.2 Attack Damage, but at 10 stacks you get a bonus of 6 Attack Damage. Since you’ll be fighting and taking assists if not kills as Sivir, it’s recommended to include this rune in your build. Not to mention that the other choices work better on junglers, for example.

Ravenous Hunter: Lastly, Ravenous Hunter is the rune to pick up in the last row. Out of the three other runes, this is the one that significantly impacts the gameplay. Sivir is naturally a very speedy champion, thanks to her ultimate and her passive. Sivir also doesn’t build active items, since she has no use for them. And she doesn’t rely on her ultimate to deal damage.

But Ravenous Hunter, in combination with Taste of Blood, will give you enough healing for the entire game. Sure, it isn’t as powerful as lifesteal, but its perfect for this playstyle where you exclusively use your abilities instead of AAs.

Manaflow Band: And since you’ll be spamming boomerangs, you’ll need a lot of mana. Well, Manaflow Band is a fantastic rune, especially in the early game. It increases your maximum mana by 25 up to 250. At max stacks, it gives you a permanent mana regeneration, equal to 1% of your missing mana. The way you gain stacks is by hitting an enemy champion with one of your abilities. This effect has only a 15-second cooldown, so you can fulfill it very fast.

Transcendence: The last rune that you absolutely need for this build to work on Sivir is Transcendence. This rune was reworked in season 11 and now it is very influential, especially on champion that need their spells.

So what does Transcendence do? Well, it grants 5 Ability Haste on levels 5 and 8. But from level 11 and on, the rune will reduce the remaining 20% cooldown of your basic abilities. This, of course, includes Sivir’s Q, so you can keep spamming those boomerangs.

Do you want to learn how to play Samira like Doublelift? Use his build!

Manamune: With the rework of Manamune and Tear of the Goddess, now you can start the game with Tear and two Health Potions. This will let you stack the item immediately, which is precisely the reason why you should purchase Manamune as your first item upgrade. All that maximum mana that you’ve gained will be converted into Attack Damage. And this will make your boomerangs hurt so much more in the early game.

Duskblade of Draktharr: The mythic item that you should build as Sivir is Duskblade of Draktharr. The primary reason for this is because of all the raw Lethality the item provides. However, the invisibility component of Duskblade is very welcomed on Sivir as well. It helps you run away from dangers and survive team fights.

Another thing to mention here is the fact that the mythic passive of Duskblade grants Ability Haste. And at full build, Sivir reaches a point where her Q has a 2-3 seconds cooldown.

Serylda’s Grudge: The third best choice here is Serylda’s Grudge. This is a straight-up Armor Penetration item that increases the boomerang’s power tremendously. Sivir shouldl always build Serylda’s Grudge, regardless whether the enemy has Armor or not.

One interesting addition to this item is the slow effect. It’s basically the AD equivalent to Rylai’s Scepter. A very helpful tool.

The execute effect that The Collector brings can easily win you games. One or two properly launched Qs and you can end your opponent’s life. And this opens up more opportunities for taking objectives around the map. So this LoL build for Sivir should always include The Collector!

Chempunk Chainsword: By now everyone has complained about the current healing problem in League of Legends. Everyone has it and everyone is broken! So, items that grant the Grievous Wounds effect are almost mandatory in every game.

The best item of that category for Sivir to build is Chempunk Chainsword. This is a very cheap purchase that also brings Ability Haste to your stats.

Every game can go in a different direction. And you need to know which items to build in which situation when playing Sivir.

The first one to discuss here is Serpent’s Fang. This is an incredible item that works perfectly in this build. However, if you want to get the best value out of it, you should build it against champions with shields, such as Orianna or Lulu.

As for the other items, they’re pretty self-explanatory. Guardian Angel gives you one “free death” while Edge of Night can help you out against a heavy CC team.

In short, you can include every item on this list, depending on the game at hand.

As an ADC, you don’t have much choice when it comes to Summoner’s Spells. Flash and Heal will be your combo in most of the games. However, you can opt for Teleport or Exhaust if it’s absolutely needed.

recommended in most games.

valuable for assisting your team.

Not all Sivir players are unified in which skill order is the best. Given the fact that Q is the most important ability that Sivir posseses, it should always be maxed out first. However, is it wiser to max out W or E second?

The answer here depends on how you play the game. The reason why you should max out E second is to lower the cooldown of this ability. As we know, this is the only defensive option that Sivir has, so it’s very important as well.

Maxing W second is better if you’re playing Sivir the regular way, as an on-hit marksman. That is why we’re recommending this skill order:

Doublelift is destroying the NA Challenger with Kog’Maw! Click here to learn how!

The ARAM build that most players run on Sivir is almost the same one as the regular. Of course, with so much fighting going on here, you want to play with Dark Harvest. Items like Manamune and Duskblade of Draktharr are absolutely fantastic on Howling Fjord because you can spam your Q all the time.

The Collector is an item that we would recommend you to include in 100% of your games. The same can be said for Serylda’s Grudge, although there might not be tanks in every game of ARAM.

On the other hand, all the items that you see in the Situational tab of this ARAM build are incredible on Sivir. Things like Edge of Night and Bloodthirster can come in handy in certain scenarios. And Serpent’s Fang should be your regular purchase if there is even one champion with a shield in the game.

Absolutely yes! If there is one thing that can describe season 11 of League of Legends then that’s burst damage. And thanks to this build, Sivir is among the highest burst champions in LoL. And only with one ability!

If you learn to lane safely with this champion and play to this build’s strengths, you can expect a lot of success. Currently Sivir has nearly 52% win rate on the ranked solo/duo ladder. That’s a very good number, given the fact that Sivir hasn’t received any buffs recently.

In our opinion, Sivir is the perfect ADC champion to learn the game with. She is very simple, very powerful, and can carry games by herself. We recommend you to give this build a try and reach your personal goal in League!

League of Legends Ahri Build for Season 11 – The Ultimate Guide

League of Legends Zed Build for Season 11 – The Ultimate Guide