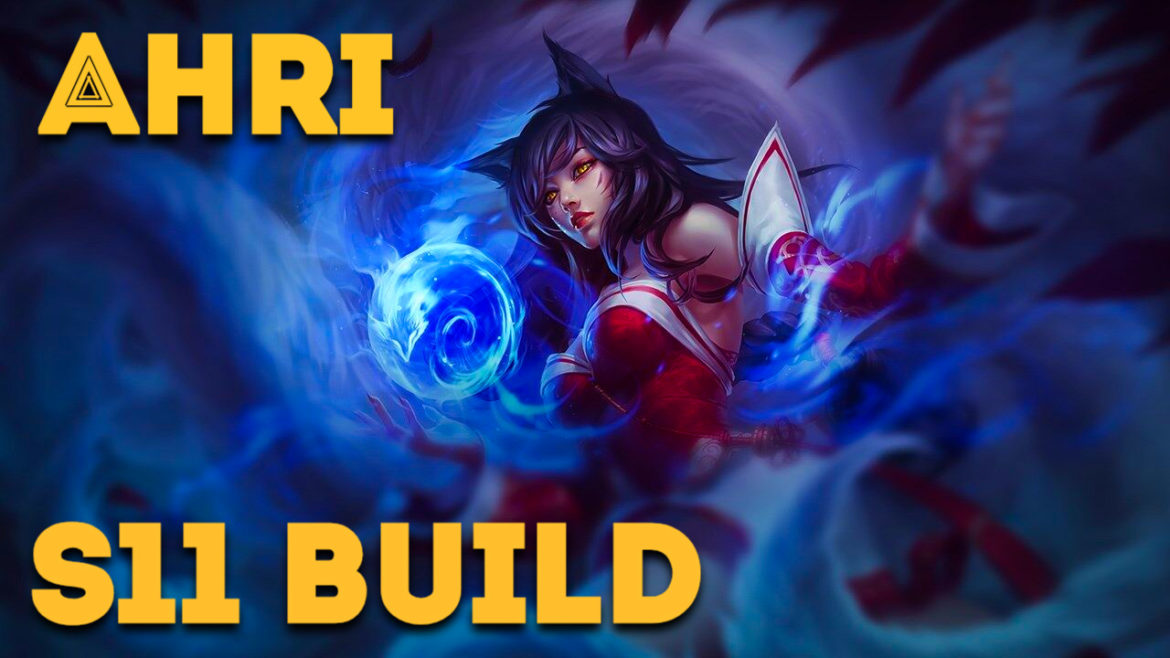 League of Legends Ahri Build for Season 11 – The Ultimate Guide

Welcome to our ultimate guide build for Ahri in League of Legends in season 11! Here we will discuss the best runes, items, and other strategies that can help you win more games in LoL. Let’s begin!

For a long time, the Nine-tailed Fox was completely forgotten in LoL. The season 11 meta started with many AD assassins reigning in the mid lane, and the AP mages taking a back foot. When the mythic item changes rolled in, many champions lost their “identity” builds. For example, prior to s11, Ahri was exclusively played with Glacial Augment, Hextech GLP-800, and Twin Shadows.

But now we have something different. Players discovered a very strong Ahri build in LoL only recently. And a couple of patches in a row, Ahri is performing incredibly well. The biggest reason for it was the buffs to Everfrost, which perfectly matched Ahri’s playstyle.

Thanks to Everfrost, Ahri is again utility-based AP assassin. This means that she is able to chain an enemy champion in CC and one-shot them. On top of that, the rest of this build allows Ahri to have more mobility, more cooldown reduction, and more healing. She is currently the ultimate weapon against many champions in the meta. And now is the perfect time to start playing her!

This is the LoL build that you should be running on Ahri in season 11!

Electrocute: Electrocute is the strongest keystone that you can take on Ahri. It has a simple definition and it fits her ability kit in an ideal way.

Once you hit an enemy champion with three consecutive attacks, be that abilities or AAs, Electrocute strikes that champion with bonus Adaptive Damage. Ahri has a very easy time proccing this rune, thanks to the synergy between her spells. Any time you use your E, Q, plus W, or AA, combo, you will trigger Electrocute. So always pick it up!

Taste of Blood: Healing is something that is crucial in League of Legends at the moment. There is simply too much damage in the game and you need a way to regenerate your health.

Taste of Blood is one of the most powerful runes in the game, offering a slight heal every 20 seconds. All you need to do is hit an enemy champion with one of your abilities and you’ll get a portion of your health back. This is very helpful during the laning phase, especially in difficult matchups where you’re struggling to survive.

Eyeball Collection: Between Zombie Ward, Ghost Poro, and Eyeball Collection, we always pick the last. Each of these three runes grants Ability Power in some way or another. However, Eyeball Collection is the easiest one to stack and also the fastest one. We recommend you to include it in your build whenever you play Ahri in LoL.

Ultimate Hunter: And Ultimate Hunter is the last rune you should pick up in the Domination tree. Ahri is extremely depended on her ulti to create plays around the map. So any cooldown reduction on this ability is welcomed. And since you’ll be going for a heavy Ability Haste item build, you can turn Ahri’s ultimate into a 30-40 seconds cooldown ability. Very valuable and absolutely needed!

Biscuit Delivery: Biscuit Delivery is a very important rune that you should including in your build as Ahri, especially if you have a difficult time in the lane. It provides you with enough health and mana healing during the landing phase, so you can be pretty safe early on. Every game you’ll get 3 biscuits that come very handy regardless if you’re playing aggressively or not.

Time Warp Tonic: And to conclude the Ahri build, you should pick up Time Warp Tonic. This rune synergizes extremely well with Biscuit Delivery, making it almost an unbeatable combination during the landing phase.

What Time Warp Tonic does is that it instantly grants you 50% value on your biscuit, then provides movement for the rest of the duration. Keep in mind that this works on regular Health Potions or Corrupting Potion as well. Any time you’re trading in the lane, just pop one of these and you’ll immediately heal up.

For the bonuses, you always want to have one Attack Speed rune, as well as Adaptive Force and Armor or Magic Penetration depending on the matchup. This is because you’ll start the game with Corrupting Potion, which burns the enemy if you hit them with auto-attacks while the potion lasts. So, more autos means more damage.

Everfrost: Everfrost is the very reason why Ahri is performing so well with this build in LoL. The item has literally everything! Enough damage, mana and mana regeneration, significant cooldown reduction, and a bit of health. On top of that, the item’s active is literally a God-sent for any close-range skill shot champion, such as Ahri or Sylas.

The way Everfrost changes Ahri’s playstyle is this. You first want to use this item to either slow or preferably root your opponent down. Then you can follow it with a Charm and damp all of your damage at once. This creates an unbearable situation for the enemy player since they can’t really do anything to escape your combo. Just make sure to practice your combos with Everfrsot!

We already mentioned that cooldown reduction is crucial on Ahri. Being able to use Charm every 5 or 6 seconds is honestly broken, so make sure to take advantage of it right now!

Zhonya’s Hourglass: Since Ahri doesn’t have any real defensiveness and is a squishy champion at her core, Zhonya’s Hourglass is the best choice as a third item. Not only does it grants Armor, but the active can be used to either dodge or survive important abilities. Examples for this can be Zed’s or Talon’s ultimate, both of which are popular mid lane picks at the moment.

It’s worth mentioning that Seeker’s Armguard was recently nerfed. Now it only offers 15 stacks, which means only 15 bonus Armor. That said, keep in mind that you no longer have to stack this item first, since it isn’t as valuable as before.

Morellonomicon: Morellonomicon is currently one of the most valuable items for AP champions in the mid lane. Grievous wounds is an effect that lowers the healing of your opponent up to 60% once the item is fully completed. This is a necessary tool in most games since the healing is so high in the game, even after all the nerfs.

As Ahri, you want to build Morellonomicon as a fourth or third item. At this stage, you will need to neutralize the lifestyle and omnivamp of the enemy champions. However, if you’re playing against Vladimir, Yone, or Viego, for example, Morellonomicon can also be purchased as a second item.

Ionian Boots of Lucidity: Ionian Boots of Lucidity are insanely useful to any champion that relies on his abilities. This item costs a total of 950 gold, which is considered very cheap. However, these boots grant 20 Ability Haste right away, which in the early game makes Ahri very dominant. We recommend buying them before even Everfrost is fully completed.

There are a couple of situational items that we want to discuss here.

First of all, you can include Banshee’s Veil in your regular build on Ahri, as long as you can get some value out of it. Its primary purpose is to help you out with a chain CC, which is prevalent in the meta currently. We advise you to get it in any game against Leona, Nautilus, Ashe, Rengar, Yone, Twisted Fate, and so on.

Demonic Embrace is in a similar position to Banshee’s Veil. This is a very powerful item, intended to help you out against tank champions. It does damage equal to a percentage of your enemy’s max HP, so purchase it against Ornn, Sion, Galio, Kled, and similar picks.

As for the rest of the situational items, you can shuffle them from game to game. Luden’s Tempest will generally give you bigger initial burst, but no active root effect. Lich Bane can be an interesting addition against multiple melee champions. And Sorcerer’s Shoes will boost your Magic Penetration.

Do you want to know how Spica plays jungle Graves? Check the build here!

Ahri is a very simple champion when it comes to Summoner’s Spells. In most games, you’ll want to run Flash and Ignite. However, Teleport can be very influential if you successfully interrupt the enemy’s ganks, for example. And Exhaust can help you out in dueling and surviving crucial moments.

against global ultimate such as TF’s.

The skill order you want to go for with this Ahri build in LoL is Q, W, E. Orb of Deception is your main damaging ability, so maxing out first is a no-brainer. The bonus movement speed that Ahri’s W provides is critical in today’s meta, so maxing it second is always good. Charm is your CC ability and the initial 1.4 second cooldown is enough early on.

or Q > E > W for longer Charm duration earlier in the game.

Ahri isn’t the most difficult champion to master in LoL. Everything revolves around hitting your Charm and damaging the opponent once they’re in CC. However, because of Ahri’s ultimate, she has a potential to create some pretty interesting plays. Here are a couple of ability combos that are generally used by Ahri players.

damaging and dodging abilities after the charm is over.

As you can see, the ARAM build for Ahri is a bit different. On Howling Fjord, you aren’t required to use Everfrost or Cosmic Drive to secure crowd control. You can opt for Luden’s Tempest and Horizon Focus, two very burst items early in the game.

The rest of the ARAM build is very similar to the normal Ahri build. You want to buy Morellonomicon and Zhonya’s Hourglass, as well as Rabadon’s Deathcap. All the situational items can be useful in a given scenario. So don’t be afraid to experiment as well.

Ahri was absent from the professional League of Legends scene for a couple of seasons. Before season 11, neither build nor meta suited her playstyle and no pro played dared to pick her on stage matches. And while it is true that Ahri is currently in an excellent spot, there are other champions that overshadow her as a potential pick.

Chazz was one of the players that tried Ahri during MSI. He didn’t have the best performance and struggled to find success. However, Jensen also played Ahri during the regular season and absolutely dominated EG. He used the exact build on Ahri that we showcased here and claimed victory.

As for the future, we will have to wait and see whether other professional players will include Ahri in their regular champion pool. We predict that she is one buff away from being the face of the current meta. But what do you think?

League of Legends LeBlanc Build for Season 11 – The Ultimate Guide