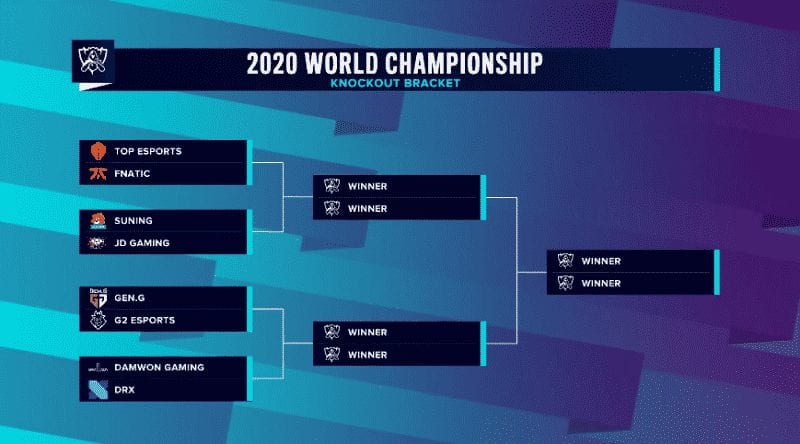 Week 2 has been really crazy for the 2020 League of Legends World Championship. The emotional rollercoaster of the group stage is now all but ended, so only a few teams are moving forward into the Quarterfinals. The knockout stage is already drafted, and by the looks of it – it’s pretty intense!

And although Worlds 2022 crushed the hopes and dreams of the NA fans, because all the LCS teams got eliminated from their groups, that just made the run for the Summoner’s Cup more interesting! Every single one of the 8 remaining teams has a chance of winning the World Championship, so it’s really hard to predict what will happen next.

But let’s check the standings, the match results, and everything else that has happened during Week 2 of League of Legends Worlds 2022, and see how the tournament looks now!

The group started with high hopes for Team Liquid to make it out to the Quarterfinals. But they stumbled on their first game on the way and lost to G2 Esports, placing themselves entirely on their mercy. Liquid needed to win every other game and wait on G2 to beat Suning so they could have a chance for a tiebreaker for the second spot of the group.

However, G2 also made some errors and lost twice to Suning. That put them in second place, and Team Liquid in the third. Machi Esports showed some heroic gameplay, but lost all their games in Week 2 and took the last spot of the group.

And Suning were just amazing! They took their early defeat by Team Liquid as a wake-up call and made G2 surrender twice to their might on the same day! The first victory was swift, and the second methodical and complete, although it took a while. Suning clearly deserved the number one spot of Group A!

DAMWON Gaming repeated their dominance in Group B in Week 2. Their game against PSG Talon was a bit shaky at the start, but they managed to close it with discipline. ShowMaker had a solid performance on Ekko, alongside Ghost on Jhin. Versus Rogue, DAMWON Gaming scored a far easier victory, done correctly by the book. But, against JD Gaming, DAMWON lost the hard way.

JDG fired back at DWG this time around. Zoom did incredible things on Camile, with Yagao being present all around with his Twisted Fate. JDG only dropped the ball in their match against Talon, which they lost by a large margin. However, they placed second and qualified for the knockout stage.

Rogue had an unfortunate run. They were indeed drafted in a sort of a group of death, yet everyone agrees that their magic just wasn’t there. On the other side of the spectrum, no one expected Talon to grab even a single victory, yet they managed to beat JDG, China’s second best team! And although their Worlds run in 2022 is done too, we’re excited to see what the future holds for this young squad.

In Group C, everyone was waiting on TSM to do their miracle run; to beat every single team and claim their spot in the Quarterfinals. But, not only did TSM not do that, they lost every single game in Week 2 as well as in Week 1. Their performance was very poor and disorganized, and their players never in sync with each other.

No one knows where the problem truly lies, because no one knows what is like behind TSM’s curtains. But that didn’t stop the numerous fans from getting angry and lashing out at the organization and the players. In the end, the whole thing was accepted as a disappointment to the North American League of Legends scene.

Fnatic and Gen.G, however,  proved to be the strongest teams in this group. Fnatic won against LGD and TSM, but lost to Gen.G. And Gen.G smurfed everyone else, collecting 3 victories in Week 2 and placing themselves on the favored first spot.

LGD put up a great fight. Yes, they lost their chance of qualifying further to Fnatic, but they showed us some great League of Legends. Their gameplay throughout the tournament was inconsistent, but they never gave up on their dream.

And in Group D, things would’ve continued to go in Top Esports’s way, if only there wasn’t the last North American hope to slow them done. TES still claimed the number one spot, despite dropping the one game to FlyQuest, because they piled on their victories against UOL and DRX. And at the moment, Top Esports look like nothing can truly stop them!

FlyQuest showed great improvement in Week 2, but unfortunately, that wasn’t enough to launch them further. Their spot was taken by DRX, who again beat everyone except TES and went off to Quarterfinals.

Unicorns of Love didn’t find any success in their group whatsoever. Their unique gameplay was interesting to see, but it was ultimately fruitless. UOL and TSM are the only two teams who finished the group stage of Worlds 2022 without a win.

The Quarterfinals matches will determine which teams will continue on the way to the Summoner’s Cup and which teams will head back home. All of these teams showed greatness thus far and will be missed for the remaining of the tournament. Yet, only can be the winner of the League of Legends World Championship. Who do you think it will be this year?

G2 Team Spotlight: Can They Win A World Championship?

DAMWON Gaming Team Spotlight: Who Is The Korean Power Squad?