Home » Rarest AK-47 CS:Go Skins: What Makes Them So Rare, and What Is Unique About Them?

Rarest AK-47 CS:Go Skins: What Makes Them So Rare, and What Is Unique About Them?

CS:GO has a few signature weapons, and maybe the most classic of them is the AK-47. This assault rifle has undergone many changes, nerfs, upgrades, and got many cool skins. Some are pretty ordinary and uninteresting, some mediocre, but some are extremely rare to face. Those skins usually serve not only as a visual upgrade of your gun but as a tangible sign of status. And today, we will make a list and talk about those skins.

We will describe the rarest AK -47 with a few main criteria:

But before we start our list, we would like to share a website Farmskins.com with you that allows its users to upgrade skins in CS:GO. This feature helps thousands of successful traders to exchange some trash skins for better-looking and more expensive ones. If you want to follow their example but need more information about this feature. 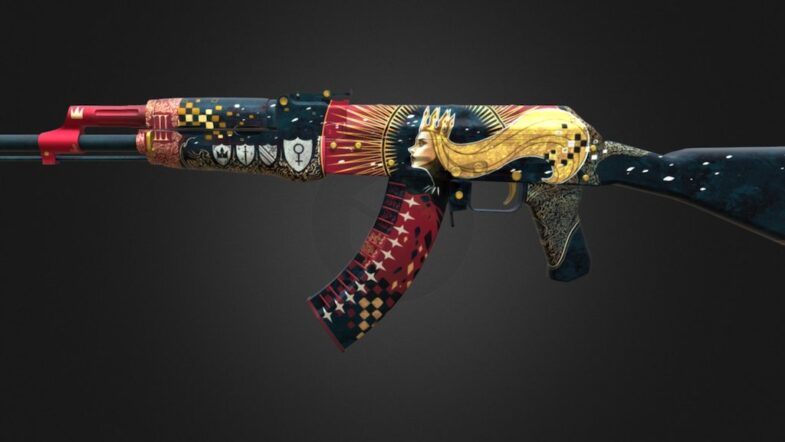 AK – 47 The Empress appeared in CS:GO in September 2017 and instantly stole many players’ hearts. This skin is painted in beautiful shades of red, yellow, and blue and decorated with many interesting patterns and symbols, including emblems near the barrel. But the main feature of this AK is a blond long-haired woman placed right in the middle of the rifle’s body. This woman is an Empress, and her figure is surrounded by patterns resembling sun rays. This “Covert” quality skin is available in all conditions. The rarest of them is the factory new StatTrek variant, which price reaches 300$.

In December 2018, AK-47 became the next gun in the game with an Asiimov skin. It has a futuristic design accompanied by simplistic elements. The primary color is white, supported by black and orange segments. There are a few “X” symbols on the body and a magazine decorating a rifle. And additionally, a tiny inscription “Warning” in the middle of the body. This skin has a “Covert” quality and can be obtained via the trade market, trading, or opening a “Danger Zone Case.” It is available in all wear states, while the rarest version is StatTrek, a factory-new option that costs 660$. 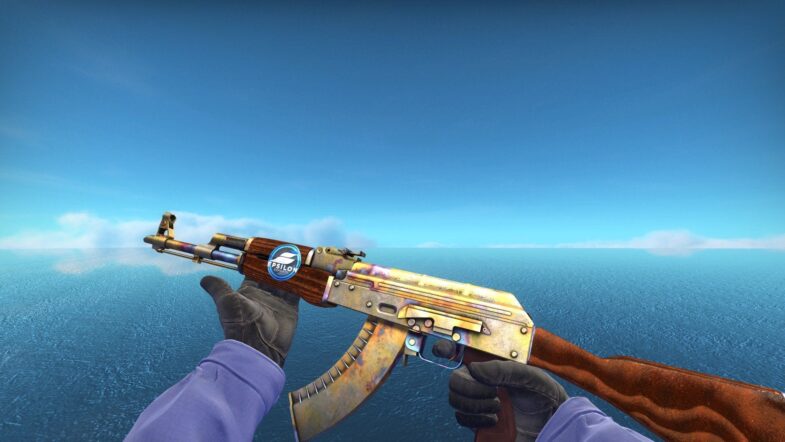 This is one of the oldest yet rarest skins on our list. Valve added it to the game in 2013 as part of the Arms Deal Collection. This skin is visually unique, as all the metal parts are covered with stains. Those stains are represented in different blue, yellow, and purple shades. But the pattern index can change the placement of those stains. The rarest and most expensive version of the pattern is when the blue stains cover most of the gun’s upper area. A less rare version is when the same area has yellow as the predominant color. And the most common one is when blue stains are put in the middle of the receiver. This skin is a “Classified” quality and available in all wear states, where the most expensive version costs 530$. 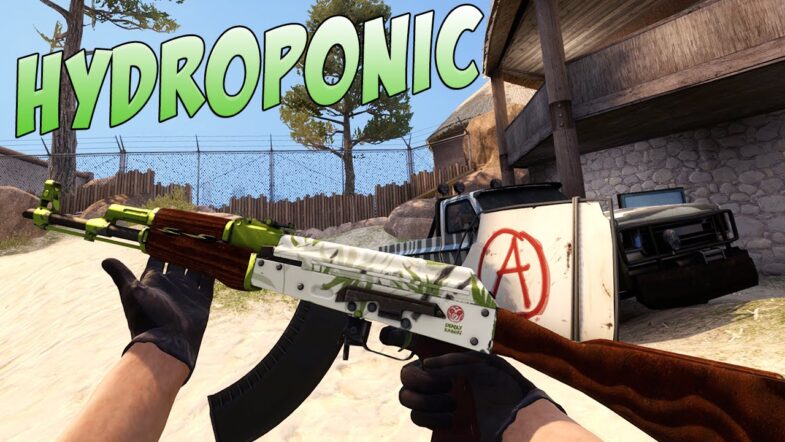 Rising Sun Collection, which came out in May 2015, brought to the game one of the most expensive AK -47 skins – Hydroponic. The color scheme includes white and green colors. The gun’s body is painted white and has greenish leaves and branches as decoration. There is also a little symbol on the left side of the rifle that has a little “Deadly Kabuki” inscription. There are also a few green accents throughout the whole gun. This skin has a “Classified” quality and all the conditions available. The starting price for this skin begins at 496$, but if you want to buy a factory-new version, you will need to spend 1800$! 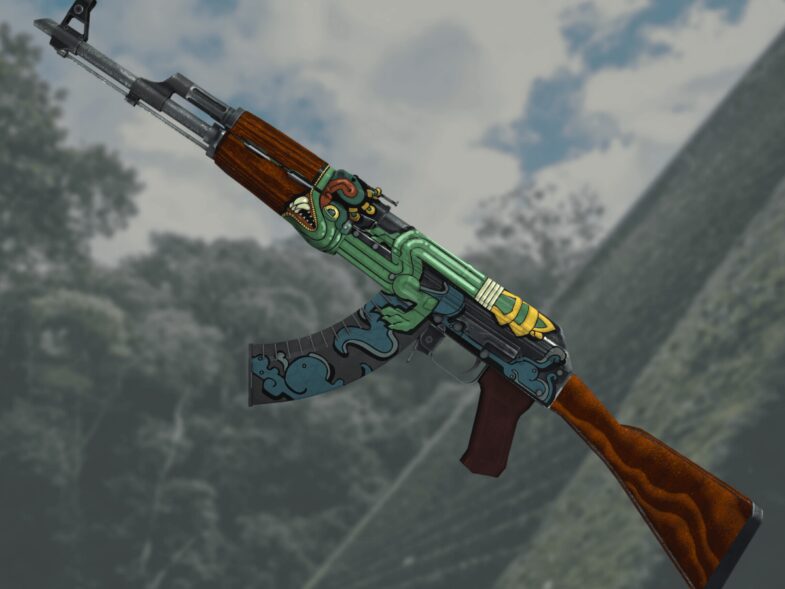 AK – 47 Fire Serpent appeared in the game during Operation Bravo in September 2013 and became one of the rarest skins, not only for AK. The main decoration that you will find on this skin is a gorgeous picture of the green serpent, who has his mouth around a buttstock. There are also a few blue clouds on the magazine and body as an adornment. This skin has a “Covert” quality and can be found on a trade market with every wear state. Unfortunately, there are not so many copies of this gun on the marketplace, but the most expensive of them is worth 1732$. 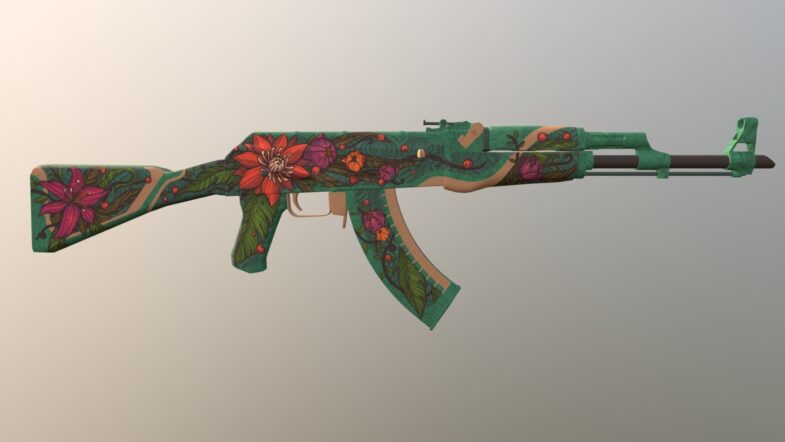 AK – 47 Wild Lotus is not only one of the rarest skins in the game but also one of the most beautiful ones. This skin was added to the game in 2019 as part of the St. Marc Collection. Almost the entire body of the rifle is covered with various ornaments and pictures of flowers and branches. The predominant color on the skin is green, but there are many flowers in orange and purple colors, being accents. This skin is so rare that you might be called a lucky player if you manage to see it in your game. It has no StatTrek variation, and its quality is “Classified.” Unfortunately, you can’t simply find and buy this skin on Steam’s trade market. There are no copies of it. You will need to use other websites and don’t expect a price less than 7000$.

CSGO Ranks: Everything You Need To Know About

Where to find CSGO Hidden Coins in Operation...