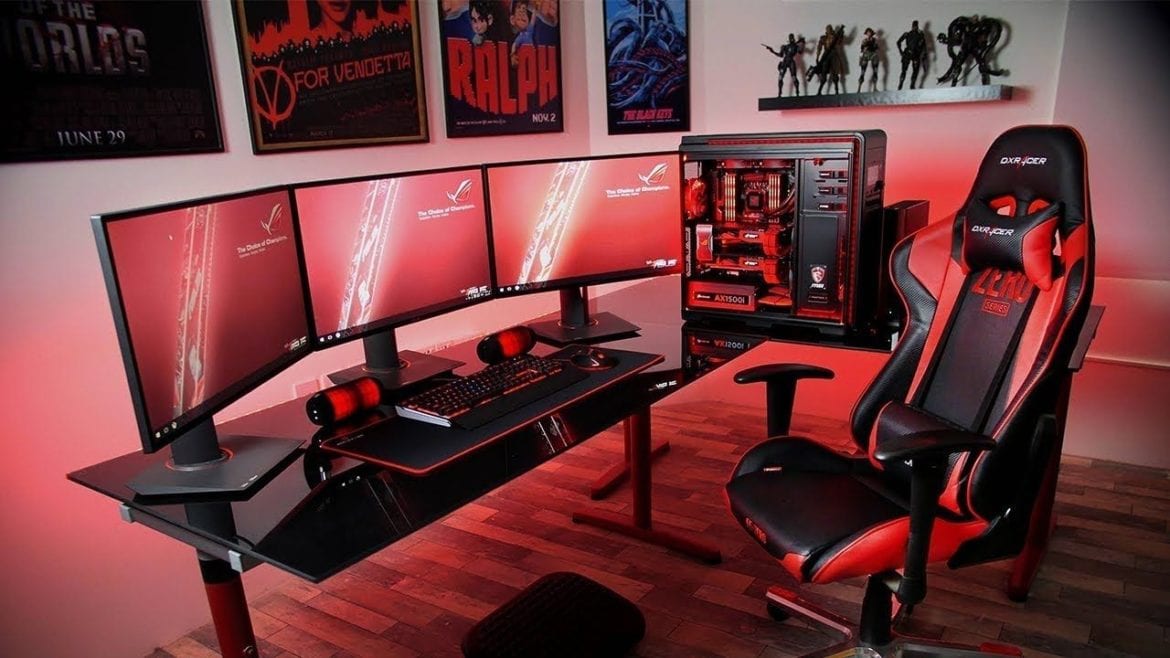 Home » Gaming Setups that are Unique and Inspiring in 2022

Gaming Setups that are Unique and Inspiring in 2022

Your gaming setup is not just where the virtual party’s at, is your safe haven from the chaos of the real world. Here are some mind-blowing gaming setups and ideas! We came across some setup that are easy to create and turn that safe space into a glorious gaming station.

As teenagers, most of us have fond memories of being glued to the TV with the short Atari 2600 controllers. We have come a long way since the days of couch crashing for casual gaming. Whether its the Microsoft Xbox or Sony PlayStation is your choice of console. Perhaps you prefer the unrestricted power of a Gaming PC. We all need our battle stations. Any corner or desk that you’ve designated for gaming is your battel station, and there’s a lot of thought and creativity people put into it.

There’s an entire subreddit dedicated to some of the coolest game setups, and it isn’t limited to just the hardware. Apart from the latest and greatest gaming consoles and PCs, there’s a lot that goes into making a rock-solid gaming room. Elements such as the gaming chair, desk, lighting, and accessories matter just as much.  Let’s jump in and take a look at some of the most creative ones we have found.

Unique Gaming Setups to Try Out

A perfect blend of work and play, this specific setup is just right for the WFH era we’ve got going. The setup is a minimalist’s dream, and the closer you look at it, the more you realize there’s barely anything to it! This is the perfect balance of black at while all over. Everything from the monitor, to the frames, this setup proves that not everything is RGB in the gaming world.

Carrying an adventurer’s gene in you doesn’t mean you can’t enjoy the high-powered action of gaming on the go. Here’s a post-apocalyptic gaming setup that doesn’t take much! This set up looks hella cool with some subtle lighting, a glorious monitor, and some wooden elements to keep you connected to nature.

We particularly liked this basement turned gaming battle station. Its play with the cool blue colors all around helps make us feel cozy. From the industrial look of the brick wallpaper to the combination of a gaming PC and PlayStation console station, the entire look and feel of the room feel like something out of a Sci-Fi movie spaceship.

Adding in some plants to the mix is not just good for the overall décor of the space. This also makes for a clean and phenomenal gaming setup, by bringing the outside, in. Ideal for gamers who want a battle station that does not stick out like a sore thumb in an otherwise contemporary living space. This clean setup makes the most out of nature and technology.

It seems unreal to ever imagine that you could end up with a gamer from the opposite sex! However, if you are among the lucky 1%, here’s a gift for two that is worth having. While keeping things simple the designated his and her battle stations can be assigned. In this particular world, the standard pink and blue hues help show whos is whos.

If you’re not one for subtlety and want to showcase your gaming setup like the trigger-happy COD gamer you are, here’s your holy grail. The combination of RGB lights to put you in the mood for some high-flying action, combined with an armory of prop guns mounted on the side is going to let you live the game at every moment.

Recently, only avid gamers put in the time and effort in creating a gaming setup that was worthy to be called a battle station. However, now that more professionals are spending time glued to their home computers to work remotely. Now is the perfect time to put in more thought into the place where you not only live but work too.

Which of these unique gaming setups are you going to take inspiration from, as you prepare to build your very own gaming den? We’d love to know your thoughts in the comments section down below.

DAMWON Gaming Team Spotlight: Who Is The Korean Power Squad?