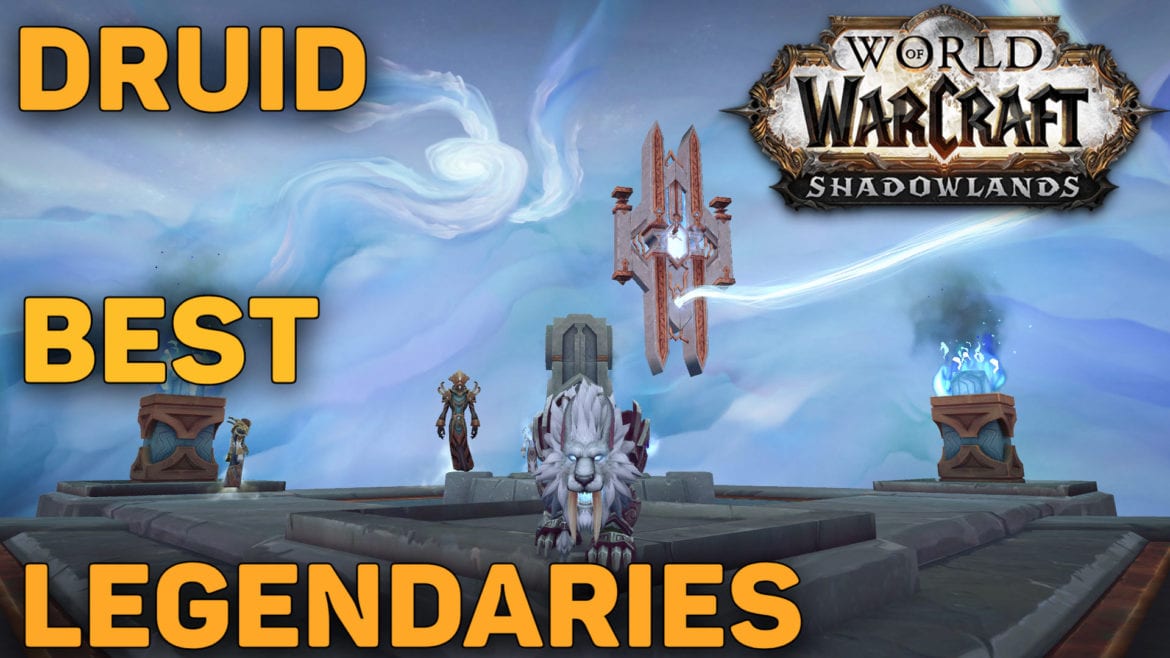 Welcome! This post will focus on providing you all the information regarding the best WoW Shadowlands Legendaries for Druid. We will be covering all specializations and all build routes, so you can choose which style suits you the most. In the end, we will tell you our personal picks of Shadowlands Legendaries for the Druid class. And also, how to make those Legendary Items work!

Druids, in general, are in a great spot right now. Both of its DPS specializations are performing incredibly well in Castle Nathria, as well as in the PvP environment. The healer and the tanking roles are in the mid-tier, with many opportunities for them to shine. The covenant system of this expansion has proven a key factor for the success of many classes and specs, including the Druid. But to make the Druid class the best that it possibly can be, you’re going to need the best Shadowlands Legendaries for Druid as well.

So, let’s dive right in!

What Are Legendary Items in World of Warcraft?

If you’re new to the game, you might not be aware of the full benefits of the Legendary Items. But fear not! This is all you have to know about Legendaries in general in World of Warcraft: Shadowlands.

First of all, Legendary Items are a special category of items in WoW. In the past, these pieces of gear were either collected from multiple raids and dungeons, or simply looted from an important boss NPC. However, Shadowlands reinvented Legendaries by giving us a completely new system. And the greatest part about is that we can choose which Legendary effect we want for our characters!

Currently, Legendaries can only be crafted through Torghast, the Tower of the Damned. We have an extensive guide on WoW Torghast and how it works, so make sure you check it out. Basically, Torghast is the place where you gather the currency called Soul Ash. And Soul Ash can later be spent at the Runecarver for your Legendary Item of choice, which is located again, inside Torghast.

However, that’s not all! Here is what you’re going to need to craft Legendaries in WoW Shadowlands:

Click here to learn more about the Legendary System in World of Warcraft: Shadowlands!

Although the best Legendaries for Druid in WoW Shadowlands are the class-specific ones, we want to give you a clear overview of all your options. Here are the general Legendary powers in Shadowlands, which can be accessed by all classes. The Legendary effects on this list have a very specific niche. And they aren’t intended for the absolute best performance of your class. So choose wisely!

Echo of Eonar: Your spells and abilities have a low chance to summon a spiritual familiar to your side, increasing your damage by 10%, healing by 10%, or damage reduction by 10% for 10 sec, based on your role. This effect is duplicated on up to 3 allies at 50% effectiveness, preferring allies with the same role.
Runecarve on: Waist, Wrist, Finger
Source: You must be Revered with The Wild Hunt and have Runecarving unlocked to purchase this memory.

Judgment of the Arbiter: Dealing damage has a high chance to release a blast of spiritual energy for 0 Shadow damage. If another ally who bears the Judgment of the Arbiter is within 5-20 yards of you, the blast will also arc to them, dealing 0 Shadow damage to enemies in the arc.
Runecarve on: Wrist, Hands, Finger
Source: You must be Revered with The Ascended and have Runecarving unlocked to purchase this memory.

Maw Rattle: Killing an enemy has a high chance to summon an Explosive Mawrat at the corpses location. After 6 sec the mawrat will explode, dealing 300 Nature damage to all nearby enemies, poisoning them and decreasing their damage done by 5% for 10 sec.
Runecarve on: Hands, Legs, Feet
Source: You must be Revered with The Undying Army and have Runecarving unlocked to purchase this memory.

Norgannon’s Sagacity: Casting a spell grants Sagacity, stacking up to 10 times. When you move, you are able to cast while moving for 0.5 sec for each stack of Sagacity.
Runecarve on: Back, Feet, Legs
Source: You must be Revered with Court of Harvesters and have Runecarving unlocked to purchase this memory.

Sephuz’s Proclamation: Reduce the effectiveness of crowd controlling effects by 10%. Successfully applying a loss of control effect to an enemy, interrupting an enemy, or dispelling any target will increase all your secondary stats by 0 for 15 sec. This effect cannot occur more than once every 30 seconds.
Runecarve on: Chest, Shoulder, Neck
Source: Purchased for Honor from Purveyor Zo’kuul. Must have Runecarving unlocked to purchase this memory.

Third Eye of the Jailer: Killing an enemy grants you the Third Eye, increasing your <Primary Stat> by 1% for 10 sec, stacking up to 7, and increasing the duration by 1 sec for each additional stack. The duration of the Third Eye is increased by 50% while in the Maw.
Runecarve on: Waist, Shoulder, Head
Source: You must be Ambivalent with Ve’nari and have Runecarving unlocked to purchase this memory.

Vitality Sacrifice: Taking significant damage from a player or Elite enemy increases your damage and healing by 3% of the damage taken, up to a maximum of 9% for 20 sec. This effect can only occur every 30 sec.
Runecarve on: Chest, Shoulder, Head
Source: Purchased for Anima from the Renown Quartermaster. You must be Renown 14 with your Covenant to purchase this memory.

The Best Shadowlands Legendaries for Druid

As we have mentioned earlier, the class-specific Shadowlands Legendaries can be very interesting, especially for a Druid. These can be used regardless of your main specialization. And their Legendary effects change depending on the spec you’re currently in. We recommend going this route only if you’re “multi-specing” all the time. Otherwise, there are more powerful choices for each specialization.

Circle of Life and Death is an excellent Legendary item for all Druid specializations. And you will get a good value out of it no matter which role you occupy.

Oath of the Elder Druid is the go-to Legendary for PvP as a Druid in Shadowlands. Its primary intention is to give more survivability to Feral and Balance Druids. However, it can still be pretty useful to Guardian and Restoration as well.

Oath of the Elder Druid: Effects of Thick Hide, Astral Influence, Feline Swiftness, and Ysera’s Gift increased by 75%.When you shift into your Affinity’s form, you gain Heart of the Wild for 10 sec, once every 1 min.
Runecarve on: Wrist, Shoulder
Source: Purchased for Honor from Purveyor Zo’kuul. Must have Runecarving unlocked to purchase this memory.

Draught of Deep Focus: When Moonfire, Rake, Rip, or Rejuvenation are active on a single target, their effects are increased 40%.
Runecarve on: Chest, Neck
Source: Raid Drop: The Great Vault

The best Legendary Item for Balance Druid in Shadowlands is by far Balance of All Things. This is also the most used Legendary effect for this specialization. It allows for an insane amount of synergy with your Celestial Alignment or Convoke the Spirits, in case you’re a Night Fae Moonkin. The way to use is to either build up to at least 90 Astral Power and then enter an Eclipse. Or simply use Celestial Alignment + Convoke the Spirits for the biggest burst.

Balance of All Things: Entering Eclipse increases your critical strike chance with Arcane or Nature spells by 40%, decreasing by 8% every 1 sec.
Runecarve on: Legs, Feet
Source: Drop: Torghast, Tower of the Damned. Skoldus Hall, Layer 3+.

Primordial Arcanic Pulsar should be familiar to you if you were a Balance Druid in Battle for Azeroth. If you spend 8-9 Starsurges or 6-7 Starfall, it will automatically activate Celestial Alignment for you. And since this is our biggest cooldown, this Legendary is valued a lot among Moonkins.

Oneth’s Clear Vision is another strong choice, yet the its overshadowed by the previous two Legendaries. It’s pretty easy to use and very fun as well.

For Feral Druids, the situation is pretty simple. Of the available Shadowlands Druid Legendaries, the best one is Apex Predator’s Carving. This is by far the biggest increase in damage, specifically single-target damage. Naturally, you’ll want to prioritize this for raiding and PvP.

Apex Predator’s Carving: Rip damage has a 4% chance to make your next Ferocious Bite free and deal the maximum damage.
Runecarve on: Shoulder, Waist
Source: Drop: Torghast, Tower of the Damned. The Upper Reaches, Layer 3+.

Circle of Life and Death performs incredibly well in AoE situations, especially when combined with the talent Primal Wrath. Your bleeds will tick 25% faster, which will help you put out more damage in shorter periods. This Legendary should be picked by mythic plus players.

Among the Shadowlands Legendaries for Guardian Druid is The Natural Order’s Will. This is an amazing tool for blocking and regenerating damage in all situations. As you can see, it’s tied with the Barkskin spell, which you have available every minute. But thanks to some conduits, you can lower this cooldown even more. In the end, you have a near “cheat-death” option every 45 seconds!

The Natural Order’s Will: Barkskin reduces damage by an additional 10%. When it begins or ends in Bear Form, you gain Ironfur and Frenzied Regeneration.
Runecarve on: Head, Hands
Source: Raid Drop: Huntsman Altimor

Ursoc’s Fury Remembered can be your alternative choice if you’re looking to do more damage. Since Thrash is an AoE ability, this Legendary Item is preferred by mythic plus players.

Ursoc’s Fury Remembered: In Bear Form, Thrash has a 15% chance to trigger an additional Thrash. Thrash grants you an absorb shield for 75% of all damage it deals.
Runecarve on: Legs, Back
Source: Drop: Torghast, Tower of the Damned. Coldheart Interstitia, Layer 3+.

Restoration Druids’ Legendary of choice in Shadowlands is Vision of Unending Growth. The reason for this is, of course, because Rejuvenation is our primary healing spell. We can spread it on multiple targets at once. But thanks to this Legendary, now you can have even more Rejuvenations up at once, without changing your rotation at all!

Vision of Unending Growth: Rejuvenation healing has a 2.5% chance to create a new Rejuvenation on a nearby target.
Runecarve on: Head, Feet
Source: Drop: Torghast, Tower of the Damned. Fracture Chambers, Layer 3+.

Verdant Infusion is also an interesting choice, especially if you do not like the change to Swiftmend. Now it will no longer consume a HoT and it will also prolong the duration of your exiting HoTs on your target.

The Dark Titan’s Lesson has a good synergy with a few talents, but it changes your playstyle completely. The other two choices do the same (or more) amount of healing without having break any sweat!

The Dark Titan’s Lesson: You may Lifebloom two targets at once, but Lifebloom’s healing is reduced by 10%.
Runecarve on: Neck, Back
Source: Dungeon Drop: Lord Chamberlain

To summarize, here are the best Shadowlands Legendaries for every specialization of the Druid class:

Note that these are the best-performing Druid Legendaries currently in Shadowlands. And things may change in the future patches. So, you shouldn’t choose a Legendary item just because it’s powerful at the moment. Instead, you should aim at what’s most interesting to you personally first, then the results later. Because the truth is that if you play a class or a spec that you enjoy, you’re going to be better than the people who do not.

We hope we helped you pick the best Shadowlands Legendary for your Druid character. For more help, check our WoW page!

How to Get Free Fortnite Skins!