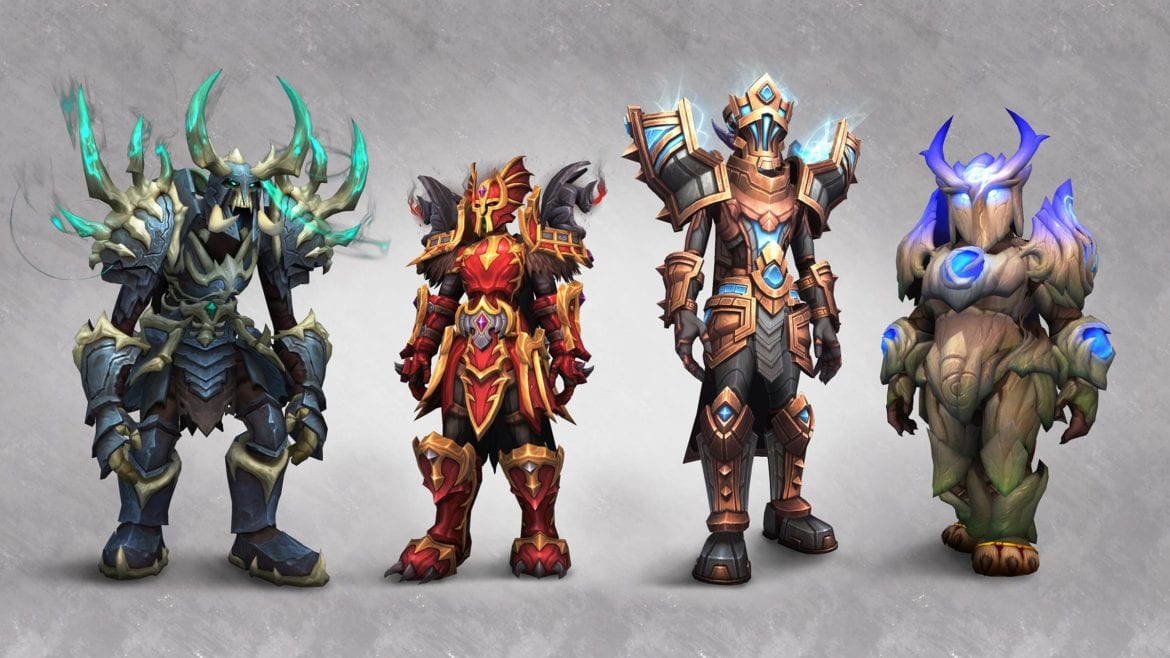 Home » WoW Shadowlands Covenants Overview: Everything You Need to Know About Your Covenant

WoW Shadowlands Covenants Overview: Everything You Need to Know About Your Covenant

Shadowlands is bringing one of the best systems in WoW’s history live. The covenants may seem like very complex things to grasp at first sight, and in a way – they are. They are overloaded with unique gameplay and cosmetic features that will be the main points for many players in the new expansion.

But we’re here to explain the key characteristics of each covenant and to help you choose one as you enter World of Warcraft: Shadowlands.

What are Covenants in WoW Shadowlands?

The covenant system is a returning one and might be familiar to the long-term players. Much like the Class Order Halls in Legion, the covenants are “groups” or “houses” that will serve as your homes throughout this expansion. You will essentially play the game from their point of view, execute missions, complete quests, and ultimately help them to secure balance in the lands of the Afterlife. All of this will result in you gaining more power, unlocking tons of new cosmetics and mounts, but most importantly – new abilities!

The four covenants are the Kyrian, the Venthyr, the Night Fae, and the Necrolords. And speaking of abilities, each of these houses has a class-specific (some even spec-specific) abilities that they grant to you if you align with their goals. On top of that, the covenants will provide you with a signature ability, which will be the same for every class or spec in that covenant. While the class-specific abilities are nearly all focused on dealing damage. The signature abilities are mostly tied with some kind of utility, whether that’s a movement buff or a shield.

Now, the four covenants will also grant access to soulbinds and conduits. Soulbinding is this entirely new form of power progression specific for each class, spec, and covenant chosen by the player. It works something like the old pre-revamped talent trees, where you unlock stuff slot by slot. And conduits are items that will further increase the power of your soulbinds and give you additional bonuses like damage, parry rating, or critical strike.

Choosing a covenant is the single most important decision in Shadowlands. Your choice will determine how your class will play out, which style it will have, and how powerful it will be. There is a particular covenant ability for every spec that will be a game-changer if you decide to have it. And if you make a wrong choice and wish to change your covenant, you can do so. Note that that is ill-advised and not recommended since it will send you back at the start of your power progression.

To avoid that, here are some things to consider about each covenant.

Mission: Carrying the souls of the dead through redemption to ascension and keeping order in the Shadowlands.

Signature Ability: Summon Steward – Call your steward to bring you a Phial of Serenity that can be consumed to restore 20% health and remove all Curse, Disease, Poison, and Bleed effects. Your steward additionally offers access to a selection of useful amenities for 4 min.

The Kyrians are the rightful rulers of the Bastion realm. They are winged angels who guide the souls of the individuals that showed greatness during their lives. In Bastion, the Kyrians try to cleanse the souls of all the evil and negativity and to get them ready for ascension in the Shadowlands. Those who lived a selfless and righteous life, in death they can enter the ranks of the Kyrians and be called Aspirants.

The biggest storyline to follow here is the story of Uther the Lightbringer. Veteran players may remember his touching death at the sword of his apprentice Arthas Menethil, the Lich King, during Warcraft 3. This narrative has been one of the cornerstones of the WoW lore, and players can find many answers through this covenant’s campaign.

The Kyrians will also provide players with some specific rewards that can’t be reached through the other covenants. There are multiple dungeon buffs that will aid you in your 5-man adventures, like hurling spears at enemies. Next, there are many cosmetic options for your armor set, including the changeable back. The various skins for your back can be unlocked as you progress in the game and can only be transmoged by the players in that covenant. The members of the Kyrian covenant will also get the Phalynx of Purity and Eternal Phalynx of Purity mounts, as well as the pet Ruffle.

Mission: Helping wicked and prideful souls atone for their sins and spare them an eternity in the Maw

Traits: Vampiric and gothic beings. They’re rational yet remorseless in their judgment.

The Venthyr is an eternal race of vampiric beings, charged to help out the hardest portion of the souls – those determined for the Maw. Their realm, Revendreth, is a gothic place of dark castles, spires, and desolate areas. The denizens are under the rule of their king Denathrius, who controls the flow of Anima – the life essence of all mortal souls that enter the Afterlife.

Despite their appearance, the Venthyr’s role in the Shaodowlands is a noble one. Their mission is to rework the souls of the vilest individuals, to help them accept fate, and to ultimately convert them into one of them. If there were no Revendreth, all who have done evil would go straight into the Maw and be condemned to eternal punishment, without a chance for redemption.

Kael’ thas Sunstrider is a known soul that dwells among the Venthyr. He was the blood elf king who led his followers to Outland during The Burning Crusade. His story is one of the saddest ones and ended with Azeroth’s heroes slaying him during that expansion. However, the players will uncover many answers about him as they progress through Revendreth’s campaign.

The Venthyr covenant will also provide players with additional bonuses during a dungeon. These include activating Anima barrels that either heal allies or damage enemies, as well as forcing a creature to obey and fight beside you. Sinfall Gargon and Gravestone Battle Armor are the available mounts from this covenant, plus the pet Sinheart. And the cosmetic armor sets are all in black and dark red, with unique back designs featuring gravestones, knives, and shackles.

Mission: Sorting out the weak from the strong souls. Those who have been powerful warriors during their lives, in Maldraxxus they are rebuilt as protectors of Shadowlands.

Traits: Skeletal and undead monstrosities. Brutal and unyielding. Power is all they value.

Signature Ability: Fleshcraft – Form a shield of flesh and bone over 4 sec that absorbs damage equal to 20% of your maximum health for 2 min. Channeling near a corpse claims their essence to grow the shield, up to 50% of your maximum health. This is most effective against powerful enemies. 10 yd range, Channeled (4 sec cast), 2 min cooldown.

Maldraxxus is the Necrolords’ realm – a vast death land of plagues, bones, and behemoths. It is the military “wing” of the Shadowlands, divided into five houses. Each house has a Necrolord and is tasked with building the strongest army possible, though through different means. War heroes and distinguished soldiers have a chance to be taken here and eternally defend the Shadowlands.

The story of Maldraxxus and the Necrolords is a unique one because it tackles many new areas in the Warcraft universe. For example, their leader Primus is an Eternal One, beings on the Pantheon’s opposite side. He is the best entity in the arts of war, but he’s been missing for some time. Players will take an active part in finding out what has happened with him and why the military realm is in danger.

Another storyline here will be Draka’s tales, the wife of the legendary orc Durotan, and mother of Thrall, the warchief of the Horde. She has never been in the storytelling spotlight, so this is a chance to get to know her better.

The Necrolord’s dungeons buffs contain a very interesting mechanic of finding banners that give various party-wide buffs. Also, using the signature ability in a dungeon allows you to spread plagues and infect players. The Necrolord’s armor sets are the most unique ones aesthetically, with the main back piece being a set of bony wings. For mounts, Plaguerot Tauralus and Armored Plaguerot Tauralus are available here, together with the pet Jiggles.

Mission: Welcoming the souls deeply connected with nature and helping them in their rebirth and reconnection with the living world.

Signature Ability: Soulshape – Turn into a Vulpin, teleporting 15 yds forward and increasing your movement speed by 50%. You may reactivate Soulshape every few sec to teleport again. Lasts 12 sec, or indefinitely while in a rest area. Instant cast, 1.5 min cooldown.

Ardenweald is a giant mystical forest where souls come to take rest and refuge when their bodies die. The natives are called Night Fae, even though they’re of multiple races, such as Sylvar, Faerie, Spriggan, and others. The Winter Queen governs over the realm to see that the natural cycle is preserved. Those individuals who’ve had a deep bond with nature end up in Ardenweald and can achieve a rebirth.

The Night Fae have helped the demigod Cenarius come back to life and sheltered the soul of the wild God Ursoc after his fall in the Emerald Nightmare. The story of Ardenweald will be centered around their shortage of Anima, the power to rebirth nature itself. The players will have the task of helping out the Winter Queen in restoring the balance of the cycle, discovering many secrets along the way.

The Ardenweald’s aesthetics are heavily inspired by the Druid class, everyone else can also access them. The armor sets are full of thorns, vines, flowers, and faerie wings, with the back piece being very versatile in appearance. When it comes to dungeon help, Ardeanweald provides the player with abilities to open up secret passages and stun multiple enemies, but only if there is at least once Night Fae member in your group.

Final Thoughts on the Covenants

One of the best things about the covenant system in Shadowlands is the level of replayability. Even if you make a mistake in your covenant choice, you can still change it at your own cost. And if you’re happy with what you got, then you can play all the rest of the covenants with your alts. Things like the soulbinding offer a massive scale of player’s agency, and we’d love to explore every path to power.

Another thing that is crucial for the success of this system is its “freshness”. For example, if you’re a Paladin, you don’t have to align yourself with the Kyrian covenant. You may enter the ranks of Maldraxxus if there is the class-specific ability you want to own and be an undead paladin. The number of such and other combinations is really big, and Blizzard deserves an appreciation for this idea.

Tell us, WoW Shadowlands Covenants you like the most, and what will be your main choice in the Shadowlands? Write in the comments!