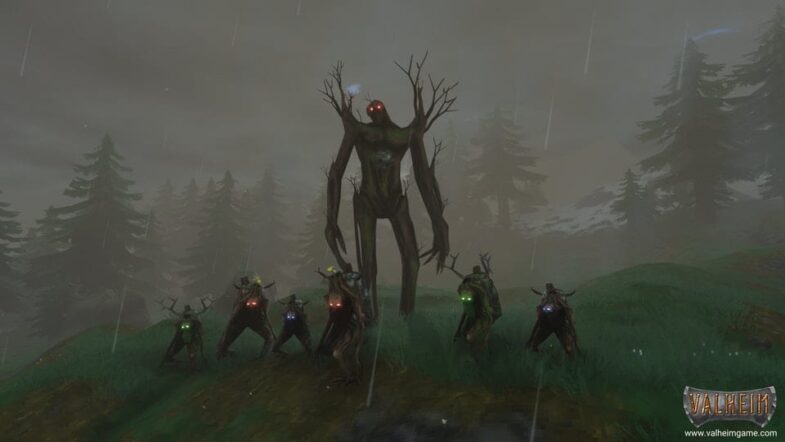 Home » What is the Best Guide to Beat Each Valheim Boss?

What is the Best Guide to Beat Each Valheim Boss?

The world of Valheim is full of mysterious and dangerous creatures, our Valheim boss guide will help! Each Valheim boss poses a constant threat to all those players who take the world of Valheim lightly and dare to tread it unprepared. Amongst these powerful creatures, there are five mythical bosses. Each residing in their own realm waiting to face those brave enough to summon them. These legendary beasts are not to be taken lightly! Let’s take a closer look and use our Valhiem Boss Guide to figure out how to defeat them.

Eikthyr is the boss of the Meadows biome and is the first boss that you will encounter when playing Valheim. The boss Eikthyr is a giant stag with glowing red eyes with chains wrapped around his antlers. He will usually be located close to the player’s starting location and far the easiest boss you will encounter. Our Valheim boss guides start with summoning Eikthyr. In order to summon Eikthyr, the player will need to acquire two deer trophies and place them on Eikthyr’s altar. These trophies can be acquired from deer that players can hunt around the Meadows biome. In order to hunt them successfully, players need to either sneak up on them or acquire a ranged weapon. Keep in mind that the deer trophies are not a hundred percent drop. It may take a few deer kills before you get them.

When it comes to the actual boss encounter, Eikthyr will perform three different types of attacks. At close range, he will try to ram the player or rear up and stomp. This causes him to perform an AOE electrical attack. The last type of attack that Eikthyr will perform is a ranged electrical attack. He does this By shooting lighting from his antlers in the direction of the player.

Defeating Eikthyr is a relatively simple task despite his size and appearance. His melee attack can easily be blocked with a wooden shield. His other attacks are not too threatening and can be dodged if timed correctly. Players can then either hit him with melee weapons between his attacks. Also using a bow and arrow and whittle his health down from a distance if you don’t want to get up close and personal. Upon his death, Eikhtyr will drop hard antlers. You will need these items to create a pickaxe, as well as the Eikthyr trophy. This trophy can be hung on the sacrificial stone! This will grand players Eikhtyr power which is a buff that will make your stamina deplete slower while running and jumping.

The second boss and guide that you will be facing in Valheim is called The Elder. He is basically a huge tree monster with red eyes and branches on his shoulders and hands. Since he is the guardian of the Black Forest. You will find his summoning stone somewhere in the Black Forest biome. To uncover the location of the Elder’s summoning stone, you will have to find the runestone that is located in the Burial Chambers. This is scattered all over the Black Forest biomes. Be careful when exploring the Burial Grounds as you will find many skeletons defending them. In order to summon the Elder, you will need to burn three Ancient seeds at his altar as an offering. These seeds can be collected from Greydwarf Shamans, or by destroying Greydwarf nests.

As the boss before him, the Elder has three different attack types. He will try and stomp on the players within his melee range which will deal AOE damage to anyone caught in it. So make sure you avoid it! His final ability allows him to summon vines from the ground which will deal damage to players.

While the Elder is not a very hard boss to beat, he still poses a natural progression in difficulty from Eikthyr. However, with some preparation, he should go down easily. Before you engage the Elder, we recommend that you farm a set of bronze gear for your character. As well as make yourself a good bow! This is the best way to win this fight is by keeping your distance and dealing with damage from afar. The Elder is weak to fire damage so make sure that you have a lot of fire arrows in your inventory. For some additional fire damage, you can lay a bunch of campfires around the area where the boss will spawn. You can also use the nearby pillars to shield yourself from his ranged attacks.

Once the Elder is defeated, he will drop the swamp key. This will allow the player to open and explore the Sunken Crypts within the swamp biomes. The boss will also drop the Elder trophy which will grand players a buff that allows them to cut wood faster.

The Bonemass – The Swamp Boss Guide

The next boss that you will encounter is the Bonemass whom you will find within the Swamp biome. He is exactly what his name claims, a huge mass made of bones, ooze, and muck. In order to learn the location of his altar, you will need to find a runestone. This will be hidden in one of the Sunken Crypts.

The Bonemass is significantly harder than your previous two encounters. According to some players is the hardest boss in the game, but that is up for debate. What isn’t however, is the fact that the Bonemass will make quick work of you if you engage it unprepared. Take time to gear up, gather supplies, and get good food because the Bonemass will give you a run for your money. In order to summon the Bonemass, you will need to offer ten withered bones at his altar which can be collected from Sunken Crypts.

Following its predecessors, the Bonemass has three attacks. A melee swipe that does AOE damage in front of the boss. This summons a huge cloud of poisonous gas which does huge AOE damage and poisons the player. It deals a large amount of damage over time as well as summon various types of enemies such as Oozes, Skeletons and the Draugr.

When it comes to strategy, coming prepared is half the battle when facing the Bonemass. Having good food such as Sausages on you as well as poison resistance potions is mandatory. We also recommend a full set of Iron Armor at least for this fight. Along with a blunt weapon such as a mace because the Bonemass is weak to blunt attacks. Large AOE weapons such as the Stagbreaker are also very useful here. From this point, it is just a matter of timing your attacks, dodging properly, and controlling the environment around you. Upon death, the Bonemass will drop the Wishbone which when equipt allows the player to find treasure chests and silver veins in the Mountain biome. The boss will also drop the Bonemass trophy which will grant the player some physical resistance.

The fourth Valheim boss that you will be facing within the Mountain biome is Moder. According to many players, it is a huge step down in difficulty when compared to the Bonemass. Moder is a large ice dragon and can be summoned by offering three dragon eggs at her altar. These eggs can be found in nests scattered around the Mountain biome. It is very important to note that they are very heavy (200). You won’t be able to go through portals with them in your inventory so in most cases. You won’t be able to carry more than one. Which is why you will need to make a few trips to get those eggs to the altar. The location of the altar itself can be found by examining the runestones found in large stone buildings in the Mountains.

Moder is the first boss to have two different phases that alternate, the ground phase, and the air phase. During the ground phase, Moder will do a melee attack that does damage to anyone within range, as well as ice breath which will slow players down and cause freezing damage to them. During the air phase, she will blast projectiles out of her mouth which will turn into crystals and deal damage upon impact.

While Moder is considered to be weaker than Bonemass, defeating her will require some preparation. The Mountain biome will make players lose health over time due to its extremely cold temperatures. Getting yourself a wolf cloak or some wolf armor is essential. The wolves can be found roaming the mountains, which is why it is essential to also get your hands on some frost resistance mead. This will come in handy when facing Moder as well, so you should focus your efforts on that.

As far as strategy goes, all Moder’s attacks can be dodged without too much difficulty. Having the best available armor is not mandatory. However, the easiest way to beat Moder is to shoot her out of the sky with your bow. Ultimately, having the best bow possible is a good idea. Damage over time arrows such as poison or fire also work well here but if you can’t get them. Obsidian arrows will do just fine too. Once you kill Moder, she will drop Dragon Tears which will allow you to craft black metal. As well as unlocking some additional structures. She will also drop the Moder Trophy which you can use to always have the wind in your sail when sailing around the map.

Yagluth is a huge skeleton and is currently the final boss guide in Valheim. Yogluth can be found within the Plains biome. The location of his altar can be revealed by finding a runestone near stone structures in the Plains. To summon the boss, you will need to offer five Fuling totems. These can be gathered by killing the Fulings that are roaming the Plains or within the Fuling villages.

Yagluth is the last Valheim boss in the game. You should grab yourself the best armor in the game when facing him! While his attacks are devastating, they are announced to the player with visual cues. Such as his hand glowing blue or orange depending on the attack. His head will tilt backward before the fire breath which makes all of them easy to dodge. In terms of strategy, the easiest way to dispatch Yagluth is to use your bow and arrows and keep your distance. Once defeated, Yagluth will drop an item that currently has no purpose in the game. As well as the Yagluth trophy which will grant players resistance to elemental damage such as ice and poison.

Now that you have the tools the strategies, and the wisdom to take on each of these Valheim Bosses with our guide. Get out there and make us proud!

What Are the Best Valheim Mods